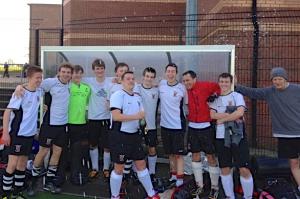 Having won an amazing 17 straight league games Alderley Edge have guaranteed top spot with their latest victory away at Lymm. Knowing what was potentially in store Alderley showed no nerves and started the game brightly, they opened the scoring when good work out wide from Finn Allenby gave Andy Walker a straight forward finish at the back post.

Tim Offer then put Alderley further in front when he held off would be challengers to force his way into the right hand side of the D and struck a spectacular shot into the far top corner.

Lymm remained competitive and pulled a goal back before Walker put made the game safe reacting quickest to a loose ball and sealing the win and the championship.

It was not such good news for the 1st team who hosted table topping Deeside Ramblers in the North Premier Division. In an even game it was the visitors who took the lead when Deeside were awarded a penalty stroke for a deliberate foul in the D.

Deeside's accurate passing and good use of space was the difference, despite possession and territory being equal. A quick exchange of passes created a shooting chance and the reverse stick shot flew into the roof of the net. An unfortunate own goal and a close range finish meant that Deeside took a 4-0 lead into the break.

Alderley were not dispirited and dominated the majority of the second half with Sam Gregory threatening out wide and Rob Hughes the stand out performer in the midfield. Alderley Edge pulled a goal back when Tim Pont found James Warburton in the D and he easily converted his 14th goal of the season.

Alderley pressed on but were unable to find another goal to get them back into the game and the score finished 4-1.

The second team continued their good form with a 5-0 away win at Deeside Ramblers 2s. In a game that they were always the more threatening in attack and solid in defence, they kept in second spot in North West One thanks to an Oliver Wildig hat-trick and goals from Adam Wildig and Neil Hanley.

The 4s were heavily defeated 10-1 by league leaders Timperley. The 5s beat Macclesfield 4th team 4-1 away and 6s stayed just ahead of them when they beat Wilmslow 4s by 2 goals to nil. The 7s with several players unavailable due to half term went down 5-2 away at Runcorn.