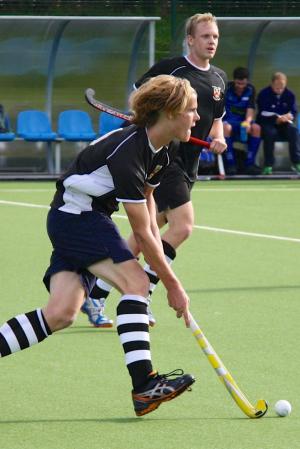 The students dominated the majority of possession early on but the Alderley Edge backline was largely untroubled.

Alderley then began to get on top with Whitehead getting to grips with his midfield role and Sibley finding his passing range from the back with the ever willing Gregory and Wildig making telling forward runs. so it was a surprise when against the run of play a missed tackle out wide lead to an overload of attackers in the D and the ball was calmly passed into the net to give Durham the lead.

Alderley Edge fought back with Warburton getting on the ball more and when good build up play down the left gave Joe Coxon a chance in the D, his first time touch defeated the 'keeper and brought the scores level.

The game was even but Alderley looked comfortable and started to threaten, with the Durham 'keeper saving twice from penalty corners.

It was Durham Uni that retook the lead pressure in the midfield, resulting in Alderley losing possession and Durham Uni again created an overload resulting in a simple back post finish.

Alderley Edge on occasion have let their heads fall in the past but not this time as they continued to press forward with Bryant and Hughes becoming more influential. As Alderley attacked through Gregory down the right hand side he beat his marker, but last ditch defending prevented the goal scoring opportunity. Then Alderley's luck appeared to have changed as Warburton received the ball in the heart of the D. He tried to work his way into a shooting position only to be felled by a combination of 'keeper and defender, a penalty stroke was awarded that Warburton comfortably dispatched.

Durham created a couple of opportunities with Riley required to clear the danger. However only minutes later, for a third time Alderley were caught short in defence and although Badger held up the on rushing attack Durham managed to get the ball to the free man who once again finished.

With time running out Alderley launched more incisive attacks and a penalty corner was awarded when Wildig was body checked in the D. Pont stepped up and his drag flick had too much pace for the 'keeper making the score 3-3.

Then with only seconds remaining Durham Uni were awarded their only penalty corner of the game for alleged deliberate use of the feet outside the D. As time expired Durham Uni pushed all 10 outfielders around the D.

The ball was passed to give a shooting opportunity, Alderley looked to have the angles covered, but the Uni player mishit his shot and the ball ballooned up and into the goal crossing the line below backboard height and giving the spoils to the visitors.

It was better news elsewhere as the Men's 2nd team maintained their position at the top of NW Division One as they took on second placed Liverpool Uni. In a competitive even game Alderley Edge took the lead with Chris Hardy's tenth penalty corner goal of the season. Liverpool Uni equalised when they managed to feed the ball to the back post for a tap in. Again Alderley's set piece prowess came to the fore, this time Sam Baker finishing a corner routine and this was Alderley's best route to goal as, despite the students having more of the possession, Alderley had the better chances. It was honours even at the end as the Uni team grabbed an equaliser with a penalty corner goal of their own.

The impressive 3rd team had a comfortable 4-1 win over Triton 2s, the goals came from Rob Marks with a hat-trick and Oli Kennon. The hosts grabbed a consolation late on, only the 6th Alderley have conceded in 15 games. They will be looking to wrap up promotion and the title before the end of February.

The 4s moved into the promotion places with a whopping 8-1 victory over Denbigh. The 6s kept up their title hopes with a 4-2 win over South Manchester thanks to Thirsk (2), Hunt and an own goal. The 5th team kept hot on their heels with a 6-2 away at Triton.