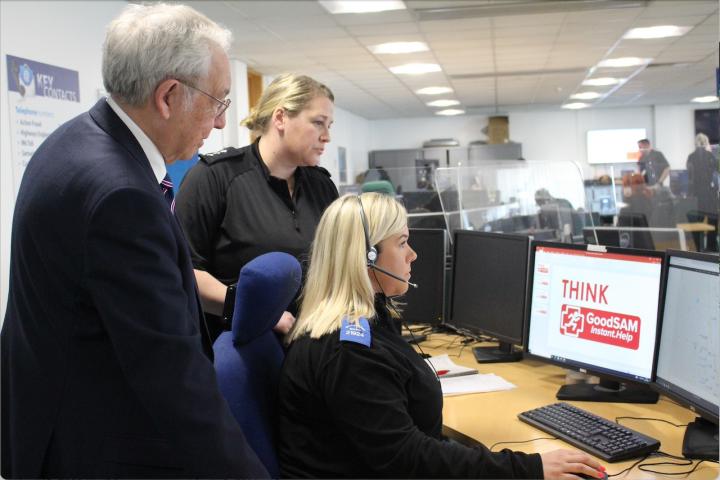 The GoodSAM Instant Help platform has been installed in the Force Control Centre (FCC) to help call handlers better understand what's going on at the scene of a crime or incident by allowing the caller to live stream what they can see taking place in front of them.

A call operator in the Force's control room will identify whether an incident would benefit from being able to see what's actually happening at the scene, and send a text message to the caller. Clicking on the link within the message immediately transmits the caller's GPS location onto the FCC operator's map and streams live video and audio from their phone.

This footage can be forwarded in real time to officers closest to the scene – helping them to identify and apprehend suspects, and enable them to assess the scene prior to their arrival and the urgency of the response required.

The captured footage – and any attachments sent by the caller – are saved automatically, and can be played back at any time and used as evidence.

It's anticipated that this pioneering technology will be particularly useful to support vulnerable people, in particular for incidents of violence or intimidation, and it's hoped that the better quality evidence will increase the number of early guilty pleas – saving time, money, and distress for victims.

Chief Inspector Claire Jesson has been heavily involved in the implementation of the new technology in her role as SWAN (Safety of Women at Night) lead.

She said: "This is a fantastic piece of equipment that will certainly enhance the service we provide to victims. For example, if a victim doesn't know their location, we can use GPS tracking to find them. It may also capture offences occurring in real time. In some cases, we can also send a link directly to the officers attending so they can assess the situation prior to arrival.

"As we embed the use of GoodSAM in our daily operation, it opens up a whole range of further opportunities for its use."

Police and Crime Commissioner for Cheshire, John Dwyer, was successful in bidding for Home Office funding so that the new technology can be implemented to support Cheshire victims of crime.

He said: "I am delighted that we were successful in our bid to the SWAN fund and that Cheshire is leading the way in how we're using GoodSAM technology. We're the first force in the North West to use GoodSAM technology for this purpose and it will mean we are better able to protect vulnerable people, in line with the priority set out in the Police and Crime Plan.

"When it comes to tackling violence and intimidation against women and girls especially, it's vital that as a force we are able to offer people that extra reassurance about their safety on Cheshire's streets.

"The enhanced evidence-gathering capabilities GoodSAM gives us will also enable us to deliver justice for victims, and improve the confidence that people have in their police service as a result.

"I know that everyone across the Constabulary is committed to making the rollout of this technology a success. Getting this right means we can then look at how it could be used more widely in the way we police our county and protect our communities."