Five roads in Alderley Edge will no longer be gritted 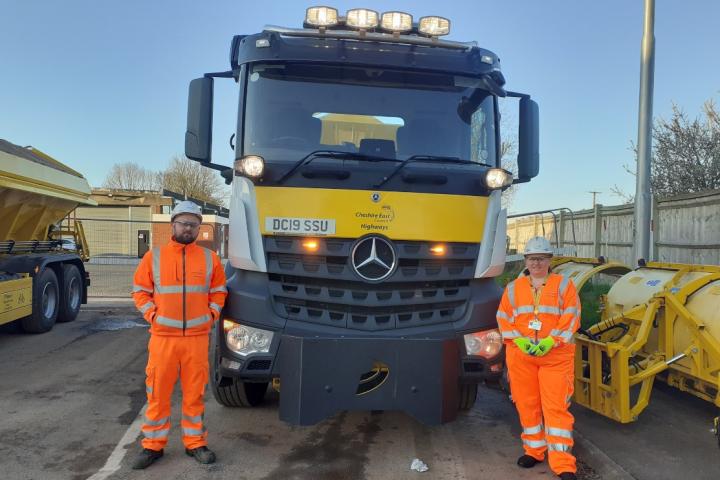 Cheshire East Council has confirmed the changes which will be made to the local gritting routes next winter following a review.

As a result five roads in Alderley Edge will no longer be gritted:

Additionally 14 roads in Wilmslow and Handforth have been removed from the winter treatment schedule, along with a number of nearby roads including Alderley Road in Mottram St Andrew, Artists Lane in Nether Alderley and Chelford Road in Over Alderley.

No roads in Alderley Edge have been added to the winter treatment schedule but 8 roads across Wilmslow, Handforth and Styal have been.

A total of 1,043km out of 2,700km (38 per cent) of the highway network has been identified as requiring routine winter treatment.

Speaking about the decision to remove Heyes Lane, Councillor Craig Browne, who is also chair of the council's highways and transport committee, said " I am as disappointed as everyone else at the exclusion of Heyes Lane from the programme; however, it is difficult for me to argue that a process where all roads across the borough are assessed according to the same criteria is anything other than completely fair and transparent.

"All roads were initially assessed in 2019 and then, at my request and at the request of the Parish Council, any local roads proposed for removal from the gritting schedule were assessed again in 2020. Unfortunately, both assessments arrived at the same result, with Heyes Lane scoring just 75 points (by virtue of the railway station).

"In order to be included in the programme, each road had to score at least 100 points. School bus routes do not contribute towards the score, unless they are also used by public service vehicles; however, it does appear that the bridge deck (at Whitehall Brook, which forms the Ward & Parish Boundary) has not been scored and I will take this up with officers.

"I will be insisting that both routes and scoring matrices continue to be reviewed going forwards, because whilst it is fair to assess all roads using the same criteria, I do agree that withdrawing Heyes Lane (in particular) from the programme represents a failure to recognise its status as one of the principal routes into Alderley Edge."

Details of the revised gritting routes can be found on the council's website.

Click here to view a map of the local roads which will be gritted.

Bob Bracegirdle
I think we’ve gone crackers. Points scoring. Heyes Lane - a main route that used to have an hourly bus service - not needing gritting? Does no one live there any more?

Linda Cook
Very penny pinching- residents on these roads pay their taxes like anyone else and should receive the same service as everyone else….but the biggest issue is safety …I wonder which councillor made this decision? …I bet they don’t live on any of these roads!

Mark Curtis
Surprised NO!
Corrupt a waste of time and money.
I emailed the council over six months ago about blocked drains not because they’ve been blocked for as long as I can remember but the road floods when it rains. Nothing has been done even though I followed it up with my local councillor. Went for my jab at Alderley Park and the road through Nether Alderley was appalling and seems to have been like this for a long time.
A few years ago the council sent letters to people to cut hedges back that were blocking the pavement.
One chap asked his neighbour Why have I been made to cut my hedge when your hedge is by far the worst on the street. The reply was I’ve worked for the council all my life so nobody is going to make me cut my hedge.
Perhaps the council are waiting for a cyclist, motorcyclist or pedestrian to have a serious accident before they repair the roads. Rather than just the road flood there waiting for our homes to be flooded before they’ll clear the drains. And maybe when a parent has to go into the road with a pram is run over they will make one of their own cut the hedge where the payment has reduced from 3ft to less than 1ft wide.
We can change where we bank shop etc but we are stuck with this corrupt waste of time and money Council.
Can we refuse to pay our taxes till these issues are rectified ?

Annette Dodd
I despair that these roads are not going to be gritted. Chorley Hall Lane is a busy road and used as a rat run at times. Hope the articulated lorries that turn down Blackshaw Lane from Chorley Hall Lane don't skid. Heyes Lane is also a well used route. A rethink is definitely needed and the local residents deserve better.

Tony Haluradivth
Marc Curtis...this official who we all pay for should be named and shamed what a disgusting sense of entitlement, thanks for bringig it to our attention .How much money has CEC saved by having no one manning their offices through the pandemic...their huge utilility bills MUST be smaller.

You say that “residents on these roads pay their taxes like anyone else and should receive the same service as everyone else…”. In which case that would mean that every road would have to be gritted. That has never been the case in any local authority in the whole of the UK.

The policy decision, was made on 4th February 2020, which was when Cheshire East Council (CEC) still operated a cabinet system. The question before the cabinet members at that time was whether to either: (a) adopt a common assessment framework applied to all roads across the borough in line with the Well Managed Highways Infrastructure Code of Practice, endorsed by the Dept for Transport; or (b) not adopt the common assessment framework, ignore the Code of Practice and put at risk up to £2m a year of “incentive funding” from the Dept for Transport.

At that time, the former conservative leader of CEC (Councillor Bailey), acknowledged that this was a legacy item from when the conservatives were in charge of Cheshire East Council.
The decision proved controversial and was “called in” by the new leader of the conservative group who were now in “opposition”. The outcome of which was “to undertake a further round of streamlined consultation on the winter service element only as part of the annual review of the Well Managed Highways Infrastructure annual review process”.

What has now been published is the outcome of this further round of consultation.

In May 2021 the way the council was run was changed from a “cabinet system” to a “committee system”. I have been in contact with councillor Craig Browne in his role as chair of the new highways and transport committee with regards to numerous discrepancies with the information published on the councils website. He has passed my enquiry onto the appropriate highways officer and asked them to contact me directly. Once they have, I plan to provide more feedback through a readers letter.