Cricket: Dramatic weekend in league and cup for Alderley 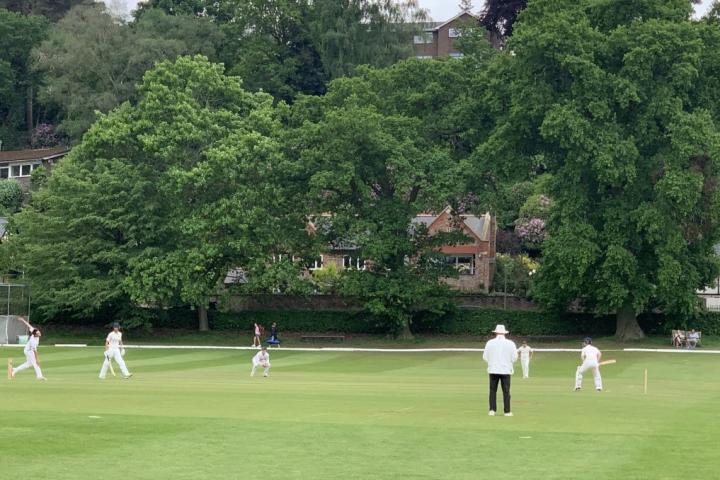 Alderley Edge First XI had a weekend to forget as their recent good form in the league was halted by new leaders Didsbury on Saturday followed by a final ball exit from the Cheshire Cup on Sunday. Confidence was high as Alderley travelled to Wilmslow Road on the back of good league form and were in the field first on a hot day as the home side won the toss and elected to bat building an early platform to reach 54-2.

Didsbury opener Charles Lowen provided the early impetus for the hosts with 42 but with his dismissal at 87-4 the visitors were showing good energy in the field and control with the ball, Richard Wilkinson with 2-43 from 15 straight overs helping keep Didsbury's top order under wraps. A 76 run partnership for the fifth wicket between home skipper Nick Anderson and number 5 Freddie Kamstra began to wrestle the momentum back to the home team but that changed dramatically with the dismissal of Anderson for 38, one of 5 wickets for Charlie Reid, and two wickets in an over from Andrew Windle (2-6 from 3 overs) sparking a momentous collapse with 4 Didsbury wickets falling with the score stuck on 163, Alderley quickly wrapping up the tail to close Didsbury's innings at 177.

In the second innings however Alderley had no answer to Liam Booth whose haul of 6-35 tore through the visitors' line-up who were dismissed for a paltry 91 with 23 (including 5 boundaries) from number 9 Dan Fesmer the only bright spot. The 86-run win for Didsbury lifted them clear at the top of the Cheshire County League Premier Division with Alderley taking 4 points and ruing an opportunity missed to sit at the summit themselves.

Alderley were back in action the following day in the Cheshire Cup second round against Oulton Park at Moss Lane but after winning the toss and batting a sense of de ja vu descended as the home side slumped to 17-3 in the early stages. An 83-run partnership between opener Will Valentine (39) and a battling half century from Tom Foreman steered Alderley back on track to 100-4.

A quickfire 59 not out from 42 balls from Richard Wilkinson and 28 from 15 balls from Chris Sanders in the middle order helped accelerate the hosts' innings in the latter stages with Alderley recovering well to post 206-7 from their 40 overs. Harry Newton was the pick of the visitors' bowling claiming 3-35. Oulton Park responded with a mammoth opening partnership of 132 with Alderley's bowlers having few answers to Danny Leech (35) and Michael Robinson who hit a sparkling 102 from just 84 balls.

Robinson's dismissal by Charlie Reid (3-21) sparked a mini collapse in the visitors line up with 3 middle order wickets then falling for just 10 runs as Alderley fought their way back into the game. With a wicket off the second ball of the final over leaving Oulton Park at 202-8 the game was moving Alderley's way but with 3 still required from the final ball of the game a no-ball that evaded the wicketkeeper going through to the boundary gave the visitors a dramatic victory, an unbeaten 27 from number 5 Jimmy O'Sullivan helping take Oulton Park over the finish line for the loss of 8 wickets.

In brighter news Alderley completed a demolition of neighbours Lindow in the T20 competition at Moss Lane on Thursday evening. Lindow elected to bowl first but were soon on the receiving end as opener Alan Day smashed 61 from 48 balls and Ed Fluck and Tom Foreman both hit 35 in a strong batting display closing the innings on 196-6. 38 from number 4 Robin Broom was the only highlight for the visitors as 5-7 from spinner Will Valentine and 3-17 for Dan Fesmer rolled Lindow out in just 13.3 overs to give Alderley the win by 109 runs.

Alderley's Second XI played host to Didsbury on Saturday losing by 8 wickets after a difficult day with the bat. Opener Dil Yahathugoda was again the star man notching 54 but with little support Alderley were bowled out for 130 with Max Backhouse taking 4-22 for the visitors. 52 not out from Didsbury opener Tom Bidwell and 40 from veteran Marcus Fisher saw the away side move to second in the table with victory in the 27th over.

On Sunday Alderley's Third XI secured a winning draw away against Heaton Mersey, just failing to secure the final wicket for an outright win. Another strong showing with the bat saw Alderley post 239-5 from their 45 overs thanks to 125 not out from Calum Wilson and 52 from fellow opener Oscar Robinson. In the second innings 5-35 from Chip White and two wickets apiece for Josh Chalk and Henry Scanlon helped press for victory but stern resistance from the hosts lower order saw Alderley take 14 points from the encounter to Heaton Mersey's 5.