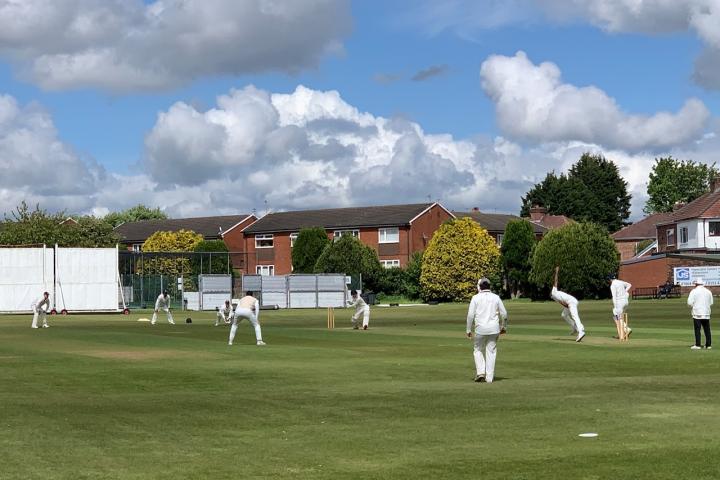 Alderley Edge First XI secured a 25 points victory at Widnes in the Cheshire County Premier League on Saturday but only got across the winning line in the final over of the match after a dogged display from the hosts' tailenders. Another damp start to the weekend meant the start of the game was delayed for several hours but after a good effort from the home side and groundsman to dry the playing area an 80 overs game could start, reduced from the usual 110.

Losing the toss, Alderley were asked to bat first but were able to set up a strong total on the back of opener Sam Perry's second hundred of the season. Perry put on partnerships of 81 with George Bell (21) and 50 with Ed Fluck (28) as the hosts' attack struggled to contain Alderley's man in form with Perry being particularly severe on the medium pace of Qamar Hafiz and the spin of skipper Tom Evans. Perry eventually fell for a fine run-a-ball hundred, containing 11 boundaries, with the score on 200 following a 55 run partnership with Chris Sanders who continued his big-hitting exploits with 46 off just 27 balls from number 5 including 4 sixes. Finishing the innings with a flourish, Alderley closed in confident mood on 218-5 from 40 overs.

Sanders struck twice early with the new ball for the visitors as Widnes slumped to 37-2 in reply putting the dangerous McCoy brothers, Luke and James, at the crease together. Good, disciplined lines from the bowlers continued to pile the pressure on the hosts batting line-up and although a couple of chances went begging in the field Alderley continued to control things with Dan Fesmer and Charlie Reid working particularly well in tandem with the ball.

Fesmer took the wicket of James McCoy to leave Widnes 62-3 which prompted a collapse in the middle order such that when he also claimed the wicket of brother Luke 4 overs later, to complete a haul of 3-19 off 8 overs, the scoreboard had slipped to 85-7. A 34 run partnership for the ninth wicket between Aaron Soni (25 from 58 balls) and skipper Tom Evans (18 from 47) looked at one point as though it may prevent the visitors from taking the win until Sanders returned to take both wickets, clean bowled, to finish with 4-40 and give Alderley victory by 87 runs.

Alderley's Second XI also won in dramatic circumstances in their fixture against Marple at Moss Lane in another 80 overs game. Losing the toss, Alderley were asked to bat first, coping well with the soggy conditions to rack up 164-5 from their 40 overs on the back of opener Dil Yahathugoda's 47 and 49 not out from Andrew Kennedy in the middle order.

Alderley started brightly with the ball reducing the visitors to 6-2 before number 4 Mike Schofield put them back in the hunt. At 98-4 the game was finely balanced but two wickets apiece for Katie Haszeldine (2-29) and Ben Lambert (2-33) shifted the momentum in Alderley's favour and when George Valentine returned to end Schofield's innings on 61, claiming 3-33 in the process, the hosts were able to finish Marple's lower order with the score on 132 to claim the 25 points win by 32 runs and complete a great fightback.

On Sunday Alderley's Third XI fixture fell victim to the weather at Sale with the visitors well positioned after batting first and amassing a big score of 259-6 from their 45 overs, Will Valentine smashing 133 from just 121 deliveries and Henry Scanlon striking 45 off 33. Sale were 33-0 after 13 overs of the second innings when heavy rain intervened and called a halt to the game.