Hockey returns to The Edge 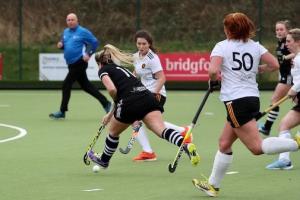 Since having the 2019 / 2020 league season cut short, Alderley Edge Hockey Club have had to adapt, as most people have, to Covid-19. So with 10 weeks of pre-season training, hand sanitisers in pockets and everyone 'checked in', it was with great excitement that Alderley Edge Women's 1's could finally welcome back the North Conference Hockey League to The Edge!

First Up Leeds, who were relegated from Division one North last season. Alderley Edge knew they would be up against a good, well drilled, young team. Leeds did not disappoint, scoring a goal early in the first quarter.

However, the early goal didn't faze Alderley Edge and they quickly found their rhythm matching Leeds for pace, skill and hard work. Lexi Archer was causing the Leeds midfield and defence trouble with her expert dribbling skills, Sarah Hopkin's excellent range of passing was finding the smallest of gaps through the Leeds lines and Sophie Hetherington in defence kept the teams structure, ensuring Leeds couldn't counter attack. Alderley Edge didn't have it all their own way and they had Grace Hardy to thank for keeping the score at 0-1 with a couple of great reaction saves from Leeds's well taken penalty corners.

0-1 down at half time, Alderley Edge took the break to identify the small changes required to push on from their solid first half performance. Imogen Walker, using her nifty stick skills, managed to eliminated what seemed like half the Leeds team, before the ball eventually flew into the roof of the net from a well taken Lottie Dennett deflection. Then, five minutes later, Alderley Edge were ahead after a wonderful strike from the top of the D by Saskia Swatland

2-1 up at the start of the final quarter, Alderley edge were now piling on the pressure and keeping Leeds pinned in their own half and Leeds were starting to look like a beaten team. Alderley Edge, demonstrating their superior fitness, were now regularly breaking through the Leeds press. However, for all the hard work Alderley Edge were still only one goal ahead and with the final whistle approaching, Leeds managed to break the Alderley Edge press and attack down the left hand side of the pitch, before delivering a quick ball in to the D for their striker to score and make it 2-2.

Alderley Edge may have been disappointed to draw the game, but it was an excellent performance and provides them with a solid platform for the rest of the season. Next week, derby day, as the Women's ones take on Timperley.

A special mention to Imogen Walker for her man of the match performance.