Squash: Alderley make a great start to the season 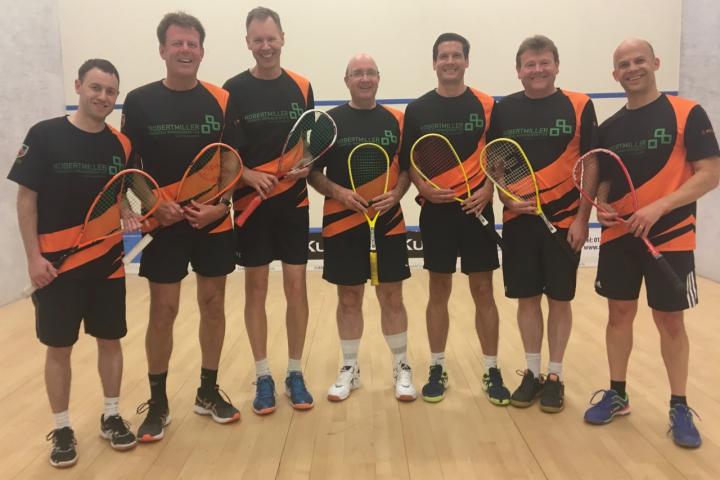 A new season began on Tuesday evening with a good crowd watching the first team take on Bowdon's newly promoted 2nd team in Division 1. There were some new names on our team sheet, so some profiles to start with:

1. Harry Falconer: Harry is a young up-and-coming professional starting his second season for the club. He is based in Sheffield and trains with 3 x world champion Nick Matthew. Strengths: squash! Weaknesses: none.

2. Tom Bamford: Tom is based in Pontefract and was making his club debut. Strengths: deceptive speed and an ability to appear extremely relaxed at all times. Weaknesses: he's returning from injury.

3. Mike Potter: Mike is in his 9th season for AECC and is playing more squash than ever which is probably fuelled by a mid-life crisis. Strengths: trickle boast; grammar and punctuation. Weaknesses: diving on court.

4. James Pickles: In his 7th season for the club, James is the 2012 Norfolk county champion (which he'll have told you if you've ever met him) and, according to him, is in the prime of his life. Strengths: running and hitting it hard. Weaknesses: touch; punctuality.

5. Adam Ford: Adam is another debutant, joining us from Wigan and bringing some much needed strength in depth to the squad. At 18, he is the youngest member of our team. Strengths: strong, quick and talented. Weaknesses: too soon to say.

Missing in action... Oliver Harris: our inspirational leader and captain who chose the first game of the season to go on holiday. Oliver is our number 2 when he bothers to turn up. Strengths: setting fire to things. Weaknesses: organisational skills.

On to the match... Harry played Josh Masters in the first string match. Josh is the world number 53 who in based in Birmingham at the Rob Owen squash academy training with a number of other top professionals such as Joel Makin, George Parker and Sarah-Jane Perry. He's also one of the most talented young professionals in the country, so this was always going to be a difficult test for Harry. It was great match with both players showing us all how to play high quality squash. After two very close games which both went Josh's way, Harry fought back in the 3rd before eventually losing 3-1. Harry is only 20 and is getting better all of the time.

Tom played Olivia Howell at 2nd string. Olivia is the reigning Cheshire women's squash champion and has improved significantly over the last year, benefitting from the regular coaching she's had from our own club's squash chairman. The chairman needs to sort out his priorities but, thankfully, Tom proved too strong in the end, winning a tough match 3-1. Tom will be a great addition to our team.

Two fortysomethings were trying to roll back the years at 3, with Mike taking on Chris Matthews. Mike has recently recovered from an 'accident' (see weaknesses above) where he'd needed several stitches in his chin and emergency dental work. On the positive side, he's enjoying social media fame with a slow motion, zoomed in video of the incident circulating widely amongst the squash community. Mike was therefore pleased to emerge unscathed from a close match, winning 3-2.

Leo Oppenheim was the Bowdon no.4, waiting patiently for James who was dependably late muttering some nonsense about the A34 and a diversion, which would've carried more weight if it didn't happen every week. Both players prioritise fitness and movement over anything else so this had the potential to be a lengthy affair. James was quickly on top and looked very comfortable until at 9-4 up in the 4th he recklessly chased down every lost cause and covered a ridiculous amount of ground (he "wanted the workout"). Unfortunately, he'd misjudged his effort and was bent over double and panting after he lost the rally. Thankfully, he had enough of a lead and recovered just in time to close out the match 3-1. James might need to reassess when he did actually hit his prime.

Finally, Adam v Steve Horabin, the league's General Secretary and new sponsor of the Bowdon team. Adam is the youngest member of our team at 18, and he was too fit, quick and good for Steve and came through 3-0, winning one of his games 11-0! Adam is definitely one to watch this season.

The debate after the match focused on Leo's fitness regime which enabled him to keep running and running without ever getting out of breath. The secret was revealed to be... yoga. He bamboozled Pickles and Potter with talk of stillness, being present and isometric movements. Despite their initial scepticism, they've committed to joining one of Leo's 'hot yoga' classes in the near future - watch this space for improvements in the flexibility and mental resolve of the (self-styled) engine room of the Alderley team. Opportunities to see panting and diving may be more limited in the future.

A 4-1 win on the night meant that lofty ambitions are already starting to emerge of taking the title. Looking at the strength of some of the other squads, that's a tall order, but still a great start to the season.

AESC's 2nds, 3rds, 4ths & 6ths lost 3-2 but the 5ths won 3-2! Feel free to come along and watch teams play at home every Thursday with the first team playing at home every other Tuesday!