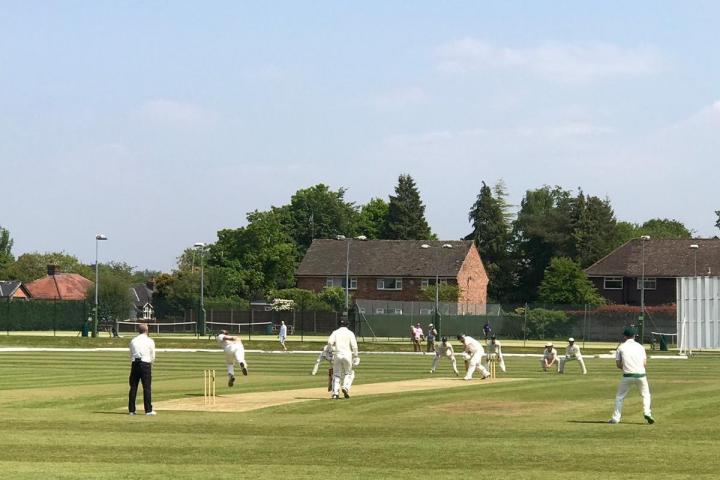 The fixture between Alderley Edge first XI and second placed Toft at Moss Lane on Saturday kept a bumper crowd entertained right until the last ball in a tied game between the two sides. Adam Worrall won the toss for the home team and elected to bat first on a hot and sunny afternoon. Alderley's top order were soon feeling the heat though with Tom Forster removing both openers with the score on 26. Alderley's Lancashire man Danny Lamb combined with Ed Fluck to accelerate the scoring before becoming Forster's 3rd victim for 33, Fluck departing shortly after to leave Alderley at 86-4.

With plenty of overs left to bat, number 5 Richard Wilkinson played watchfully in adding 80 with skipper Worrall (40) and 60 with number 8 Charlie Reid (28) in the two key partnerships that pushed the hosts to a strong total of 249-8 from their 55 overs and kept Toft's Lancashire star Rob Jones wicketless from 15 overs in the process. Wilkinson was eventually dismissed with an over of the innings remaining for a brilliant 81 including 12 fours and 2 sixes, Toft all rounder Andrew Jackson taking 2-51 from 17 overs toil in the heat.

In front of a crowd that had swelled following the conclusion of the nearby Alderley Fair, Toft's top order continued to keep them in touch with the required rate. Lamb claimed the crucial wicket of Jones, beautifully bowled through the gate for 38 to leave the visitors on 92-3 to swing the game in Alderley's favour. Robert Sehmi and Henry Hughes added 70 for the 4th wicket before Andrew Windle removed both claiming 2-44 in the middle overs. At 194-7 the hosts should have had victory in their sights but an explosive knock of 35 from just 18 balls from Jackson batting at number 9 looked to be taking Toft across the finishing line.

Alderley's Aussie seamer Keiran Elliott held his nerve and, with the help of a good running catch in the deep from Wilkinson, accounted for Jackson in claiming 3-82 from his 17 overs. From the final over Toft required 3 runs to win and Alderley a single wicket to claim victory. Charlie Reid bowled superbly in conceding only 2 runs and with the 5th ball of his over claimed the wicket of Toft's number 11, well caught by Ed Fluck with the score on 249 to leave both teams with 16 points apiece from the fixture.

In the reverse fixture at Booths Hall, Jon Usher's second XI faced a stiff challenge at the home of the reigning second xi champions. Winning the toss and bowling first Alderley's seamers prospered claiming six of the home side's batsmen before the 100 mark was passed, Dan Fesmer (4-56) and Mark Hutchinson (2-37) doing the damage with the new ball. Home wicketkeeper Ewan Williams played doggedly to register 85 for the hosts and along with Will Dunkerley's 21 not out from number 10 helped to get Toft to 191-8 from their 50 overs. Jonny Scurrah took 2-29 from 10 useful overs for the visitors.

Scurrah and Mark Currie ensured there would be no slip-up in the run chase, combining to add 99 for Alderley's second wicket. Currie's departure for 71 with 60 runs still required allowed for some devastating hitting from Ben Lambert to complete a comprehensive victory by 7 wickets, Lambert blasting 32 from 24 balls in accompanying Scurrah who finished unbeaten on 73.