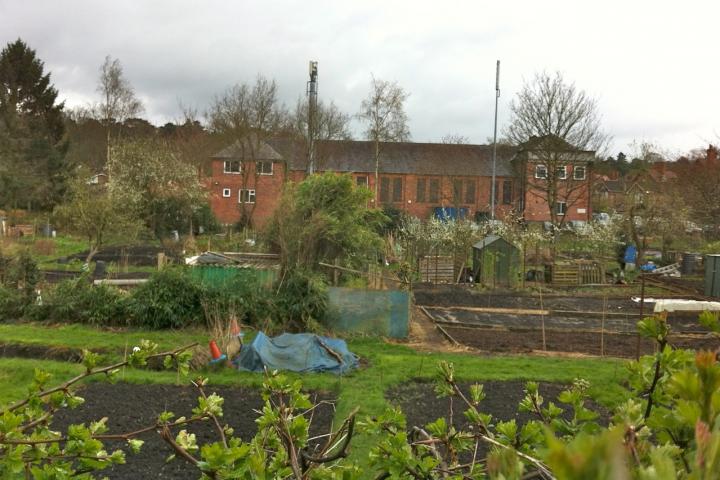 According to a member of Alderley Edge Parish Council, their predecessors' plans for a car park at the Heyes Lane allotment site "would never have been successful".

In November and December Councillor Geoff Hall reported on the final costs of the medical centre and festival hall, and in his final report this month he looked at the previous parish council's project to build a car park on Heyes Lane.

Speaking at the Parish Council meeting on Monday, 8th January, Cllr Hall said "The former Parish Council presented the Heyes Lane car park as a simple solution to the village's parking needs and one which was only being thwarted by the resistance of the Heyes Lane allotment holders. However the reality was very different and I will show that this project would never have succeeded, as there were two other much more serious problems with it.

"These were. one finding an alternative site for the Heyes Lane allotments and funding the new car park."

Referring to finding an alternative site, Cllr Hall said "The Parish Council has a statutory obligation to provide allotments. The former council's proposal was to move them from Heyes Lane to a field at the end of Lydiat Lane. However, this option would only be possible if a deal was struck for a land swap between Alderley Edge School for Girls and Cheshire East. The Parish Council had no control whatsoever over this deal.

"In practice that deal failed to go ahead so Lydiatt Lane immediately ceased to be a viable site. The Parish Council had no alternative site available to it. The Heyes Lane car park was therefore immediately dead."

Secondly looking at funding for the new car park, Cllr Hall said "Even if the Lydiat Lane deal had gone ahead the previous Parish Council would still have a major problem as it had to be able to finance the building and operation of the new car park.

"The previous Parish Council claimed the car park would be built for £280,000. We found no documentation to show that this figure was anything more than the product of guess work.

"Our own assessment carried out by independent consulting engineers shows that the cost would have been a minimum of £646,000 and more likely over £800,000 depending on the surface used. Other estimates have suggested that, given drainage problems on Heyes Lane allotments and at Lydiat Lane ,the actual cost of moving the allotments and building a new car park would have been substantially higher.

Cllr Hall concluded by saying "Given the high cost of the building the car park, coupled with the lack of available funding from the medical centre, there was never a viable way of funding the Heyes Lane car park - even if the alternative site at Lydiatt Lane had indeed become available,

"The 140 space car park promised by the previous Conservative Parish Council was therefore a fantasy with no realistic prospects of success."

Peter Watson
I think we all intuitively knew this from the very beginning.

Peter Johns
This doesn’t make any sense to me. Let’s assume the cost of the car park would be £800,000 - close to the top of the range suggested. Then assume that each of the 140 spaces created generates income of £2 a day (car parks in Wilmslow earn much more than this). That would generate more than £100,000 a year - a return of over 12.5% p.a. on the investment. That sounds pretty healthy for a public sector investment.

Stephen Justice
I think the previous comment about the 12.5% return rather optimistically assumes that £800k is available to spend and that every space would be occupied on each of 357 days per year.

If there’s no cash then it would take eight years of that unlikely maximum gross income before running costs to pay any loan obtained or for a commercial undertaking to cover its initial investment.

Not quite so attractive in my view.

Claire MacLeod
You may not be surprised to hear, Duncan, that I disagree with you. Firstly, perhaps you can share how have 'things gone wrong'?

The report mentioned in the above article is the third of three which have been produced by the present Parish Council to inform Alderley Edge residents of the work (and challenges) they have undertaken in the last 2.6 years. It appears that these reports are factually based, supported by hard numbers and professional evidence and, sadly for you and your former colleagues, serve to illustrate that the previous Parish Council operated in a chaotic (at best), deceptive (at worst) manner, relying on back-of-a fag-packet 'planning' before promoting their agenda.

Do you have a response or defence for the financial 'planning' of the new medical centre and festival hall being so inadequate? You have remained uncharacteristically quiet after the publication of the two reports relating to these projects.

And as far as the present Parish Council being voted in to solve the parking issue, I think your memory may be failing you. I'm sure I don't speak just for myself when I say they got my vote as they promised consultation and open communication. They promised to listen and to keep the electorate informed. They promised to represent Alderley Edge First, rather than a political party. All the things I felt the previous Parish Council neglected to do, in their 'wisdom'.

The fact that the parking issue has not been resolved 'wholesale' is hardly surprising when one considers the huge obstacles the PC have had to overcome since inheriting the mess from you lot. Considering there were NO documents relating to the medical centre (on which work had already started) handed over to the incoming PC from the outgoing PC, what has been achieved is very impressive. Staggering, in fact. I take my hat off to all involved.

Pete Taylor
To be perfectly Frank, Duncan; as I told you on this forum, you should have divested yourselves of the mill-stone around your necks before the last election.
Well done to the independent Councillors- people before Party.

Duncan Herald
Whatever i write here is my own opinion and my own memory. If there is a wish to ask other previous P.C. Councillors, that's nought to do with me.

Claire; you ask why I haven't commented on the 3 lengthy reports. Because I have no wish to be dragged into yet another 'he said, she said' or 'they did, they didn't' orguement. That sort of thing never goes anywhere and for most readers is probably just plain boring.

But I will pick up on just one point, to exemplify misunderstanding.
The cost of doing-up the Festival Hall:
1, the previous Parish Council are attacked for not leaving behind, after the election, a fully costed list of works for the doing-up. In my opinion, of the 2 major jobs, the building of the Medical Centre was easily the most important and the Festival Hall could sit 'on the back burner' for a while. (subject as was to the need to do some work on the Hall, as a new Medical Centre was being built on the front of the Hall).
If the new P.C. chose to try to achieve both jobs at the same time, that was their decision and I'm not complaining about that.
2. the previous Parish Council is being attacked for the large amount of costs needed to 'do up' the Festival Hall.
You can't have it both ways: if the incoming Parish Council did not have a costed series of works and thus few or no contractual obligations, then the incoming P.C. is responsible for any spending on the Festival Hall. As the newly elected group, they had every legal and probably moral right to spend as they saw fit. I for one, have no problem with that.
But how can the previous P.C. be in any way to 'blame' for what their successors chose to spend? No-one forced the new P.C .how to spend money on the Hall.
The few monies spent by the previous P.C. , on the Hall, was simply to keep the old Hall going e.g. repairs to faulty wiring, some new carpeting; only a few £thousand.

By the way, there have been several requests for the publication, in the public domain, of an detailed/itemised list of works and costings re. the Festival Hall. Has that happened yet?

But anyone have a solution and when is it going to be implemented.

The situation around the school is very dangerous! If the problem is not rectify then accidents will happen.

By the way, Few weeks ago I saw two coaches in Eaton Drive is crazy, the road is not suitable for coaches never two of them. The school needs to be more responsible.

Terry Bowes
Now then Duncan you're right about the present P.C. being in for 2.6 years. I've read Cllr Halls article very carefully and I really can't see 'blame' in there as such.
I do see that after 2.6 years they are still sorting out a few miscalculations left by the previous P.C. and after some proper consultations and costings a slightly truer picture of the expenditure needed to bring to fruition the previous P.C.s dreams.
I'm not saying the dreams were bad or unattainable, just the costings.

Duncan Herald
Hi Terry,
thank you for your mild-mannered and clear message.

Briefly though, would you accept that as the previous P.C. did not leave any detailed costings (we didn't expect to loose the election and so costings would have come along evenually; got that wrong didn't we !) then the monies spent by the new P.C on the Festival Hall, are entirely their responsibility (that's responsibility, not blame; words are important I believe).
Would you also agree that publication of works and costs, in fine detail, regarding works to the Festival Hall would be a good idea?

Catriona Lang
Personally, I voted for the new Parish Council as I felt they would best serve the interests of the people of Alderley Edge in a transparent and considered manner in every element of their role, be it parking or whatever. Something I didn't feel was happening at the time. That is the same for a lot of people I know in the village.

Every time I read the news articles and associated comments on this website, I am absolutely sure I made the right decision. Again, a view shared by pretty much everyone I know in the village.

To be Frank, I'm not sure that the statements of one of your former colleagues fits your recollection of the Medical Centre being the main thrust, whilst the Hall renovation remained on the "back burner."

The first link below and the statements therein hints at the vague financial planning that is now being discussed.

The second includes photos showing the front façade of the Festival Hall after demolition. As this was taken whilst the former PC were still in office, it kind of lends a lie to the "back burner" theory.

Harry Martin
What about the people that had the allotments ? Were they happy to be bulldozed ?