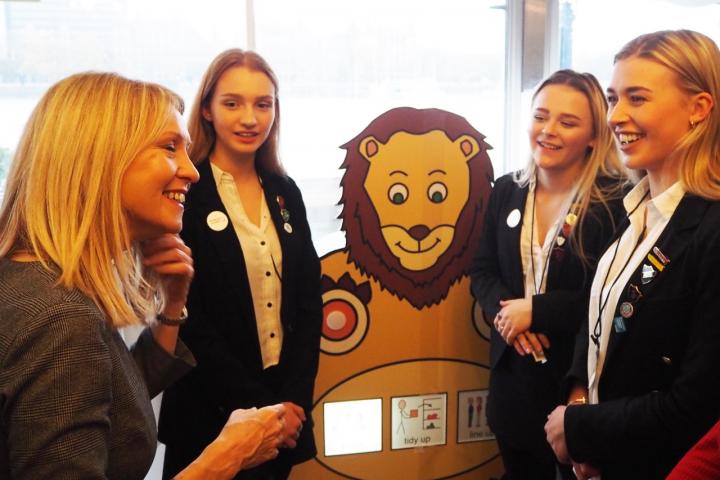 In July, the Engineering Team at Alderley Edge School for Girls were named the Young Engineers North West at the regional finals of The Big Bang Competition. They successfully designed and built a playground clock and traffic light system for deaf and blind children and wheelchair users.

As a result of their success they were invited to Parliament by Stephen Metcalfe MP on Tuesday, 7th November, to display their project and explain it to MPs and industry leaders.

The event was part of the Tomorrow's Engineers Week with the theme of #EngineerOnAMission. The team consisting of Jessica Allwright, Bianca Boren and Nina Fraser spoke with great enthusiasm throughout the day as everyone wanted to know more about the giant smiling lion that had arrived in Parliament.

Miss Mel Johnson, Assistant Head of Sixth Form, said "The students were delighted to be introduced to Tatton MP Esther McVey who took a great deal of time to listen and question the team on their project as well as discussing her experiences in her education and life as an MP. It was an amazing opportunity for the students and an experience they will never forget. They were blown away by the beautiful interiors of Parliament.

"The next adventure for the team and their lion themed playground clock is the National finals of the Big Bang Competition in March 2018. They will be competing for the UK Young Engineers of the Year. It is wonderful to see the development of the students not only with their interest in Engineering but with their confidence to speak and explain their project with such clarity in new situations."