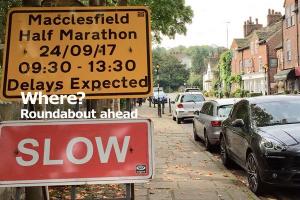 Last Sunday I was halted on the Alderley to Macclesfield Road because the runners were crossing this busy road. The marshals must have been somewhat frustrated in seeing a traffic queue of up to thirty cars (behind me) before only three were let through and the rest stopped.

It is an A road and the organisers (not their first year I believe) could have alleviated the problem by closing the road at Alderley Edge with a sign saying "Closed past Slade Lane" and diverting to Henbury via Monks Cross. For me, hoping to get to church in Birtles Lane for 11.15 was out of the question so I abandoned the attempt.

The marshals should have helped by communicating rather than ignoring the line of stationary cars. They could have helped them turn round rather than suffer blasts on horns because of frustratration. An alternative could have been to go down Artists Lane (making it one-way). Although I sympathise with these volunteer marshals, one of them could have come down the queue to mention the likely delay time and that they would be better turning round since no traffic was coming the other way to prevent this.

No maps were found on the Cheshire East Council website to explain the route in advance and prevent motorist irritation, yet the marshals when spoken to pointed to the Council for complaints about the road closure and that criticism should be to them.

Had the police been present things would have been different; after the first 50 runners, say, they would have been temporarily halted. This could have allowed the traffic through in batches of ten cars maybe to reduce the heavy queuing.

It is no use putting generic signs (as the one above) in Prestbury which doesn't say which roads ahead at the roundabout are affected. This has to be lazy organisation.

We don't want to prevent such an event taking place, but as one driver was anxious to get to Macclesfield Hospital and others probably with equally urgent needs with waiting for over 20 minutes it seems something has to be done.

Next year can CEC advance plan? Close roads, sort out the necessary diversions and advance advertise the facts. Then the marshals will not become frustrated by hold-ups of traffic. Drivers will understandably will show their frustration by sounding horns so we can do better than this.

Fiona Doorbar
There is a route map on the macc marathon web page...this is where I looked to check the easiest route from Alderley to Macc last Sunday.

Karen Robinson
Signs for this event have been up for weeks. Always very well signposted.