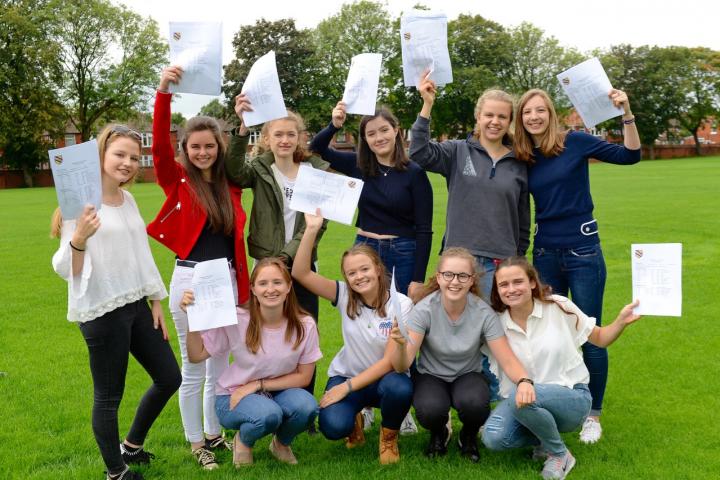 Withington Girls' School pupils from the Wilmslow and Alderley Edge areas are celebrating excellent GCSE results, with ten girls pictured here having notched up an impressive 84 top grades between them - 70 A* grades and 5 A's being in the unreformed subjects and 14 grade 9 and 8s in the newly-reformed English papers.

Local high achievers include Catrin Parry, from Alderley Edge – a North of England hockey player – who notched up 10 A*s and two 8's; Wilmslow pupil Katie Roberts, who is Deputy Junior Captain at Wilmslow Golf Club and whose excellent grades included 9 A*s and a 9, the highest possible grade in the newly-reformed English papers; and Sophie Wood, a member of the Wilmslow Hockey Club, whose awards also included 9 A*'s and a 9.

Withington's Year 11 girls have once again achieved an outstanding set of examination results, securing the top A* grade in 83% of non-reformed GCSE papers taken this year, with an exceptional 97% attaining grades A* to A.

In the more rigorous newly reformed English Literature and English Language courses, pupils performed extremely well. Overall, 93% of all papers taken by the cohort of 70 girls were awarded the top A* to A and 9 to 7 grades.

Withington is delighted that its Year 11 girls have excelled across the curriculum and in many subjects A* was the average grade achieved, including in Mathematics where 91% of entries were graded A*, Biology (91%), Chemistry (87%), Physics (91%), Double Award Science (84%), and Geography (80%). In Computer Science and ICT (the ECDL GCSE equivalent) 100% of grades were A* and in Further Mathematics 81% of the 47 entries were awarded the exceptional A* grade 'with Distinction' or A*.

In the creative subjects, Art, Drama and Music, 100% of pupils achieved A* or A, whilst almost every Withington girl also gained at least one GCSE in a modern foreign language, with the vast majority being awarded an A* or A grade. In Latin and Greek, 100% of all grades were A* or A.

Withington's Headmistress, Mrs Sarah Haslam, said, 'These are wonderful results which are richly deserved by all of our Year 11 pupils – they have worked hard, showing great commitment to their studies, and also played a full part in the wider life of the school – they have so much to look forward to in the Sixth Form and beyond. I am delighted for the girls and their families and also for their teachers whose excellent teaching and support for the girls has enabled them to achieve this outstanding success.'

Withington Girls' School will be holding Open Days during the Autumn Term. There will be opportunities to visit their Junior and Senior Schools on 9th and 11th November and a Sixth Form event is being held on 3rd October. An Open afternoon will also run on 26th September when girls hoping to join Year 7 in 2018 can experience the School on a working day. Interested parties should contact WGS Admissions on 0161 224 1077 or [email protected]