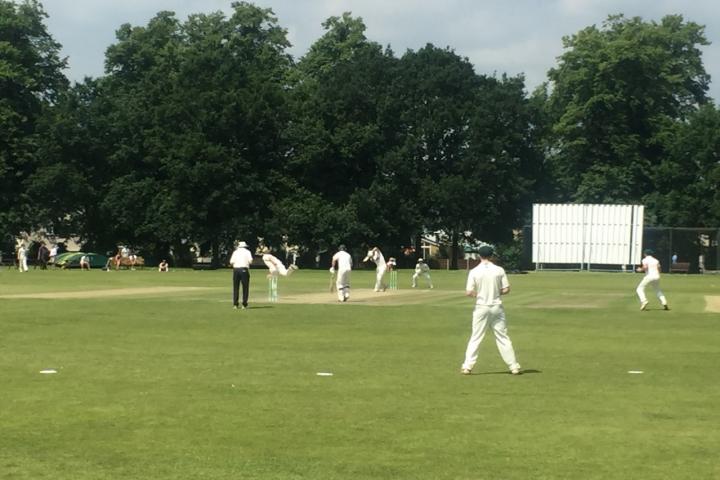 Alderley Edge First XI cemented their position at the top of the ECB Cheshire Premier League with victory against Toft on a scorching day at their Booths Hall ground on Saturday.

With the home side sitting in third place in the league when play began, table-toppers Alderley were boosted by the inclusion of Lancashire all-rounder Jordan Clark for the first time this season. Captain Adam Worrall won the toss and elected to bat first in seemingly batting friendly conditions with Clark entering the fray earlier than Alderley would have wanted with their two openers dismissed with the score on 25. Richard Wilkinson combined with Clark to put on a crucial partnership of 67 for the 4th wicket to take Alderley from a precarious 55-3 to 134-5. Clark scored seven 4s in compiling 52 before being caught at long off giving Toft's veteran Nigel Muirhead one of his three wickets for the day. Wilkinson followed soon afterwards for 37 which prompted a lower order collapse from the visitors, their last 5 wickets being lost for the addition of just 16 runs to leave Toft requiring an under-par 151 for victory. James Lomas was the destroyer-in-chief taking 4-22 for the home side.

Having used only 41 overs of the first innings, Toft were left with a tricky period of 15 overs to bat before tea was served. This proved to be crucial as Clark and Hamish Winter-Irving tore into the hosts top order in the period before the break. At the point the players left the field Toft had been reduced to 24-5 with their batsmen having no answer to the pace and variation of the two Alderley opening bowlers. After re-charging at the tea break Alderley's second wave applied pressure to the hosts' middle-order that they were unable to withstand. To the delight of the fielding side in climbing temperatures, wickets fell at regular occasions with Richard Wilkinson applying the finishing touches dismissing the final four batsmen to collect 4-18 with Toft 40 runs short of their target. Clark claimed 4-26 with the ball, Toft number 5 Andrew Jackson's steadfast 45 not out the only contribution of note with the bat from the home side. The maximum 25 points Alderley collected boosted their lead at the top of the table to 29 points. Earlier in the week Alderley had further cause for celebration having confirmed their place in the quarter finals of the T20 competition with a 100% record from the group stages with wins against Toft, Macclesfield and Bollington.

Alderley's Second XI played the reverse fixture against Toft at Moss Lane with the visitors leading the way in the Second XI Premier League. Toft won the toss and asked Jon Usher's side to bat first, the home side responding to being 70-4 at one stage to smash their way to 270-7 off their 50 overs. Usher recorded a quickfire 89 off just 50 balls backed up by 78 from Dan Fesmer. Boundary-hitting was the order of the day with Alderley racking up twelve 6's and twenty six 4's in their innings.

Alderley started the second innings brightly, Toft slumping to 22-2 in the initial stages of their reply before rallying to reach 200-3. Tight bowling from Mark Warnes, James Bateman and Dan Fesmer resulted in the visitors falling behind the asking rate and further wickets duly falling with Toft unable to take advantage of the short boundary towards the clubhouse side of the ground as Alderley had in their innings. With Toft finishing on 264-7, Alderley recorded a deserved winning draw as their campaign gathers momentum after a slow start.

Chris Smith's 3rd team continued the good form for Alderley recording a comfortable victory away at Marple on Sunday. Winning the toss and choosing to bat, the hosts were restricted to 137-8 by some fine spells of bowling from Will Chalk, Harry Elms and in particular George Bell. Bell weighed in with an unbeaten 41 in Alderley's reply but it was a very well made 66 not out from Ollie Pooler that led the visitors to a resounding 9 wicket victory.