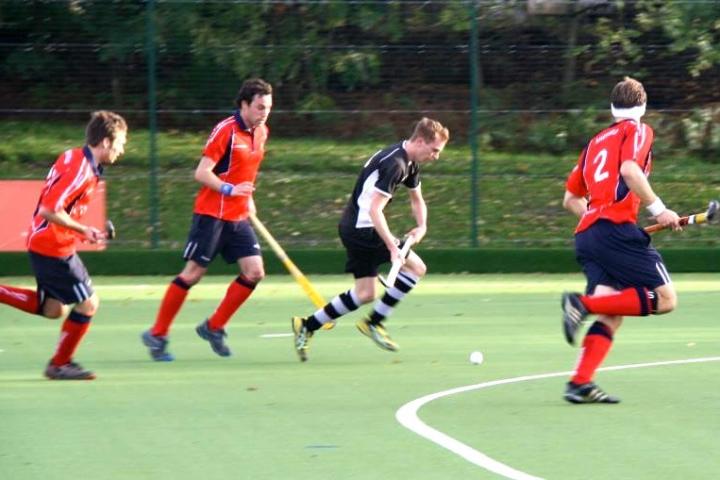 Alderley Edge maintained their fine run of form when they visited Bowdon who sat above them in the North Premier League.

From the off both sides showed attacking intent, without the necessary execution. As the game settled down it was Alderley who were the more composed on the ball with any potential Bowdon threat being blunted by the impressive Whitehead.

Sanders and Hall were busy in the midfield breaking up play and linking up well with the full backs Kay and Cresey. These passages of play eventually brought Alderley chances with Bryant and Gregory going close before the opening goal came. When it did a nice piece of interplay enabled Sam Gregory to get free and he crossed for Wildig whose close range effort was blocked by the 'keeper and the rebound fell to Ben Gregory who slapped the ball high into the net.

Bowdon tried to fight back but created little in terms of clear cut chances, they did have the ball in the net from a penalty corner but it was correctly disallowed. Then Alderley began to assert more pressure as Parr's run was brought to an abrupt end and a penalty corner was awarded. McCormick's effort was saved by the 'keeper but he could only deflect the ball into his own player on the line and a penalty stroke was awarded. Scott Mattingly stepped up to take the stroke and his shot had too much on it for the 'keeper and Alderley went into the half time break 2 to the good.

The second half was a similar affair with Alderley creating chances with Sawas pushing forward from the back putting Alderley on the front foot and Bowdon were grateful to the keeper who saved from Warburton and Wildig.

A yellow card for each side disrupted the flow of the game. As time wore on Bowdon started to have more possession higher up the pitch, but the crosses were well defended by the defence or the keeper. Bowdon were then awarded a series of corners in relatively close succession - one forcing Riley into an unconventional double save and the others having the routines break down.

They did eventually score from yet another corner when the low shot eluded both the keeper and the defender on the post.

This looked like it would set up a grand stand final 5 minutes, but it was not the case as only moments later Alderley attacked with pace and Warburton linked up play before Sam Gregory was on hand to finish a flowing move with a first time finish at the back post. Final score 3-1, the win created a gap to the teams below as Alderley reach the half way point of the season comfortably in the middle of the table.

The seconds are 3rd following a fairly straightforward 4-2 win over Winnington Park. Leading 3-0 at half time thanks to Joe Coxon who was the start man, scoring two and creating one for Oli Wildig, which was the goal of the game following quick incisive passing before a volleyed finish. The other goal was scored by Chris Hardy from a penalty corner, his 12th of the campaign.

The 3s stopped the rot of recent times with a creditable 3-3 draw with title chasing Neston 2s. Alderley took the lead each time. Nick Sims scored the first two, before being taken ill at half time.

The 4th team moved to second place with a tough 2-1 win away at Llandudno 1s.

The 5s slipped to 3rd place after dropping points against Neston, 1-1 the final score.

Brooklands provided the opposition for the 6th string and ran out 4-2 winners, meaning Alderley slip down to the bottom half of the table.

The mixture of youth and experience in the 7s again proved to be a great formula as the pulled clear in second place beating Timperley 5-0, thanks to a hat-trick from Sam Buckingham and goals from Daniel Crawford and Charlie Toms.