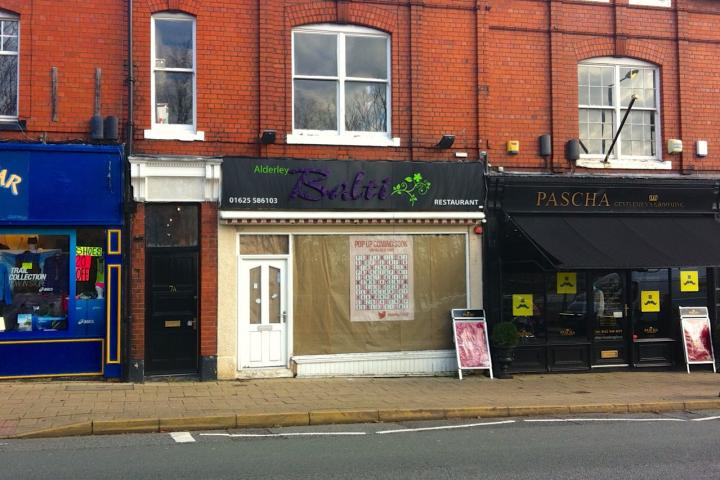 The team behind Manchester and Knutsford's Indian eateries, Mughli, are set to open their third northern venture in the form of a pop-up restaurant in Alderley Edge.

The venue, which has been named The Railway Cafe, is currently taking shape and is set to open in the first week of December for 10 weeks.

Local chef David Gale, who has worked closely with Mughli to create a unique, Indian-inspired small-plates menu for the pop-up, has been named as its Executive Chef.

Gale, who most recently led the kitchen in the successful Lawn Club in Spinningfields, was previously the Executive Chef of the Hilton Deansgate where he won North West Chef of the Year. He has also had a successful career in London, working with culinary greats such as Nico Ladenis and Alain Ducasse, as well as winning a 5 Diamond Award when in charge of the opening of Soho House New York.

"We genuinely love what we do here at Mughli and its great when we're given an opportunity such as this to work with some of the most talented people in the industry."

The spirited duo have created a bespoke tipples menu to compliment the style of food on offer, focussing primarily on accentuated gin & tonics with a concise yet creatively considered cocktail menu, imported Indian soft-drinks and local craft beers.

The Railway Cafe comes at the end of a busy year for the four brothers. In Manchester, Mughli has featured on national television on several occasions and fed the likes of the Prime Minister, Nigel Slater and Will.i.am. Whilst in London, their British coffee shop and wine bar Damson & Co, which opened in Soho in 2013, has proved a big success and work has now commenced on a new, all-day brasserie, Queenswood, which is expected to open in Battersea early next year.

Despite their busy schedules, Mughli's Sax and Haz Arshad insist that the pop-up in Alderley Edge was an opportunity they did not want to miss.

"We had been talking with Chef Gale for some time and when we were asked to launch a pop-up restaurant in one of our favourite suburbs, it seemed the perfect fit for the exciting, collaborative style of menu we were looking to introduce to the North West."

Steve Savage
La Dennis and Ducasse... is that an anagram for Alain Ducasse?? Best of luck to Haz & team

Vince Chadwick
What on earth's a 'pop-up' restaurant? Do the menus have pictures of the dishes which 'pop-up' when you open them, like the pop-up books my kids had when they were little?

Jon Williams
"Please note that in true ‘Mughlai’ tradition we do not serve beef and only use halal meats in all of our restaurants."

It gets a thumbs down from me them !

Marc Asquith
Only open for 10 weeks - so what comes next ?

Jon Williams
Halal is Arabic for permissible. Halal food is that which adheres to Islamic law, as defined in the Koran.

The Islamic form of slaughtering animals or poultry, dhabiha, involves killing through a cut to the jugular vein, carotid artery and windpipe.
Animals must be alive and healthy at the time of slaughter and all blood is drained from the carcass. During the process, a Muslim will recite a dedication, know as tasmiya or shahada.

Stunning cannot be used to kill an animal, according to the Halal Food Authority (HFA), a non-profit organisation that monitors adherence to halal principles. But it can be used if the animal survives and is then killed by halal methods, the HFA adds.

Steve Savage
And the vast majority of Indian and middle Eastern Restaurants use Halal meat. My main concern is the quality of life the animal has had before slaughter. Intensive factory farming methods ..... £5 supermarket chickens etc.

Taking aside the means of despatching the animal. Do you suppose that the low cost and high proliferation of Halal food outlets supports good animal husbandry?

The Railway Cafe
First and foremost, we’d like to pass on a big thanks to all those who have shared such kind words of support, both here and social media generally, for our upcoming pop-up. We’re all very excited about opening in Alderley and sharing our hard work with you in December.

In response to some of the comments above regarding the quality of the meats used at our restaurants, whilst we do not wish to argue the merits of halal, kosher or any other type of meat, we can reassure you that both Chef Gale and Mughli strive to use only the best ingredients for our customers. The meats for the Railway Cafe will be supplied to us by the multi-award winning, family-run J W Mettrick & Son – all locally sourced, environmentally sensitive and produced to the highest welfare standards. John comes highly recommended to us by Chef Gale (and deservedly so after the food-tastings we have had).

We would also like to mention that the Railway Cafe, unlike Mughli Restaurants, will serve {very tasty} beef on the menu.

Thank you all again and hope to see you soon.

Steve Savage
No Alan, just like I wouldn't make a sweeping statement like that! However, there is a strong argument that the halal/ Jewish method of dispatch of animals is more humane than the stunning method used in abattoirs in this country. Having been to an abattoir myself I certainly wouldn't criticise the methods used by other cultures & religions.

Jon Williams
J W Mettrick & Son was very local to us some years ago, a good company

Richard Fitzwilliam
I am very excited to see this open and potentially keep open if trade is high and all parties can agree on rates.
Still struggling with the concept of cocktails in an Indian restaurant but Jamie Jones is one of, if not the, best bar tender in the country and I can't wait to see what he has planned.

Vince Chadwick
I'm still struggling with the concept of a 'pop up restaurant'. Maybe it's the building that pops up? Where does it lurk the rest of the time? What occupies the site until the restaurant next 'pops up'? How can you be sure it won't 'pop down' again while you're having a meal there? What happens if it does?

I think we should be told!

Vince Chadwick
Arrgh! Look what's happened in Amsterdam with a pop-up toilet! Could something similar happen here with a pop-up restaurant?