Is this the smartest drive for free publicity? 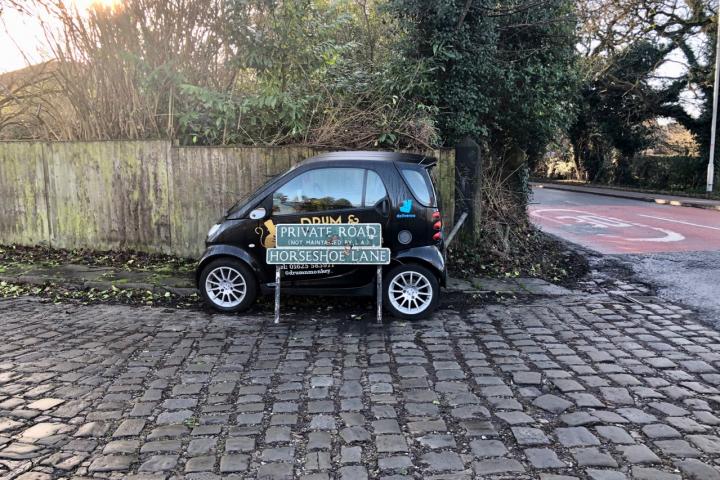 A car which has been parked on a private road for several days in a prominent position as you enter the village appears to have caused annoyance rather than its intended purpose.

A small car covered in adverts to promote a local pub has been left at the end of Horseshoe Lane where it is clearly visible to motorists as they travel along Wilmslow Road.

Presumably the intention was for it to act as a free notice board promoting the pub however one unimpressed person has moved the road sign, which clearly states it is a private road, and leant it up against the car, obscuring the advertising.

In 2015 two new signs mysteriously appeared on Horseshoe Lane, one announcing a 10mph and the second stating only permit holders can park, which neither Cheshire East Council or Alderley Edge Parish Council installed and knew who did.

In 2012 an old fashioned van advertising fire servicing was left parked on London Road for over three weeks.

We have contacted the owners of the Drum and Monkey for comment.

Andy Brown
Not smart at all. Everywhere it has been parked it has contravened the highway code. Is that what the Drum and Monkey owners want to project as their image?

In the photo it is contravening the following:

Rule 239 - do not park facing against the traffic flow. It's parked on the left facing traffic coming down Horseshoe Lane

Rule 243 - do not stop or park opposite or within 10 metres (32 feet) of a junction, except in an authorised parking space

So if it isn't moved already it should be.

Mathew Owen
I get your point Andy , and irresponsible parking annoys me as much as (if not more) than most people but as the sign says it’s a private road so do those rules count ?

Yvonne Bentley
If the phantom sign mover has damaged the vehicle’s paintwork, have they not also committed an offence ? Has anyone spoken to the proprietor of the Drum and Monkey before taking this action? They may not be aware that such a seemingly innocuous act would cause such consternation.

Mark Russell
I really don’t get people around here. Everybody moans that shops and pubs are shutting and then moan more when it’s replaced by a coffee shop. A local business owner has come up with a clever idea for some advertising (it’s not free as it will have cost to wrap the car) and guess what??? Everyone moans. What harm is it causing there? None. Fire engines can clearly get through. Meanwhile not 50 metres up the road school children in tractors cause chaos everyday.

Adrian Scott
If this is "A private road", ie not subject to actions by the Council. It doesn't take a lot of thouight for the owners of the private road to give notice that if the vehicle is not removed forthwith by the owners, it will be removed to the local scrap yard and crushed

Stuart Redgard
With respect, it is not clear that this road is actually a "Private Road". To be a private road it must be owned by a private individual and I have not seen any evidence of this. What is clear is that it is an "Unadopted Highway". This means that it is not maintained by Cheshire East Council.

Just because the Highway Code is being contravened does not mean that criminal offences are being committed.

Because it is an "unadopted road" means that the Highway Code does not actually apply to it.

If anybody can actually show me that they are the landowner of Horseshoe Lane, by showing me the land registry documents and title deeds then I'd be happy to issue a correction and apology.

Jon Williams
The lane (cobbles) were patched up a few years ago, in the Horseshoe Farm days by a private contractor, so maybe whoever paid him owns the lane ?

Andy Brown
It doesn't matter whether the road is a private road, an unadopted road or anything else. The highway code and traffic laws apply to it. By this simple definition:

The definition of a road in England and Wales is ‘any highway and any other road to which the public has access and includes bridges over which a road passes’ (RTA 1988 sect 192(1)).

Therefore the car is parked in contravention of the highway code.

Duncan Herald
1. it is indeed an unadopted road and never has been a private road.
2. no-one seems to know who owns it (if anyone).
3. the repairs to the cobbled lane was paid for by the Railway people as part of the 'deal' whereby the contractor/Railway people were allowed to park their machinary on Horseshoe Farm land, whilst works were carried out on the nearby railway.

Tony Haluradivth
It seems as though one of the new gentleman owners of the Pub (alongside Robinsons) is intending to go out of his way to annoy some in the village. First the horrendous unnanounced firework display at 10.00pm before Christmas and now this. I am suspecting he is a young man ( we understand that he does not live in the village and it is he who owns the car). Perhaps in his youthful exuberance to promote the Pub he forgot a few rules (I would not dream of calling him a yob at this early stage).
I have been drinking in the Pub on and off for 30 years and it is not always a good idea to alienate some of your local your local clientele in the rush to grab passing trade from outside the village .

I accept the definition of a Highway that you have stated. I accept that you believe that the Highway Code is being c=ntravenied.

I do not accept that any offences are being committed. None of the Rules that you refer to state: "MUST / MUST NOT"

Clarification: As the picture is clearly taken in the day time then rule 248 was NOT being contravened when the picture was taken.

I cannot comment on the accuracy of the report itself about long it's been parked there. I haven't actually seen the car myself. I have learnt not to rely on " as fact", anything I read in any type of news media. Whether online or in a hard print copy form.

You are entitled to your opinion, just as I am.

Yvonne Bentley
#Tony Haluradivth yet again your ephibiphobia has come to the fore. At least one of the licencees is over 45! ( and I understand that it managed by a woman ). Neither seems to fit with your prejudiced profile.

Andy Brown
The car is now gone. It'll be interesting to see where it appears next.

Tony Haluradivth
Yvonne Bentley do your research .. l was not referring to the female manager I am referring to the 2 new owners of the Pub both of whom are male. They co own the Pub with the brewey ...I merely hypothesized that one was an "exuberant young man" he is 40 I have since discovered. Further the Brewery (Robinsons) confirmed that the fireworks were not authorised in fact they apologised to my daughter (a nurse who needed her sleep for an early shift)for the horrendous noise that night and confirmed that they (being very powerful category3) fireworks should not have been let off without a licence, a professional display organiser and prior agreement with the Council. I doubt that you would have heard them in Nether Alderley.
Further many people in Horseshoe Lane complained about the car just being dumped there. I am all for good inventive advertising but there is no need to annoy some of your clientele. I have in no way criticised the Lady manager (who is very nice and in fact was happy to tell my daughter that it was the younger of the 2 owners who was responsible for the car and firework stunts). I came here with all the correct facts rather than jumping to conclusions (unlike yourself) and have been careful NOT to name the gentleman concerned as I am sure he is now going to be an exemplary proprietor

Yvonne Bentley
# Tony Haluradivth. Please feel free to revisit my comment as I did yours. You did not “hypothesise” but jumped straight to a suspicion of youth. I did not comment on the firework display so there was no need to further justify your stance nor refer to neighbouring parishes. I referred to the lady manager as, much like yourself, I was unclear about the subject of your criticism. I neither condoned or condemned the original advertising strategy but you seemed to have jumped to a conclusion about my stance by further referring to it.

Tony Haluradivth
Yvonne you accused be of a kind of "youthphobia"