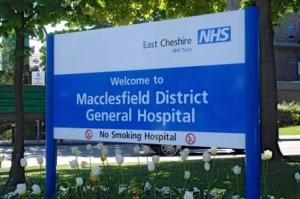 Last week a report leaked to the press indicated that the Cheshire and Merseyside Sustainability and Transformation Plan (STP) included a downgrade of the A&E department at Macclesfield General Hospital to a minor injuries unit.

National NHS bodies had specifically requested STP leaders not to reveal plans to the public and to refuse Freedom of Information requests. (One can only wonder why?)

Immediately after these leaked plans were published health bosses claimed it was a 'mistake' and there were absolutely no plans to downgrade A&E facilities at Macclesfield General.

Eleven years ago I reported on similar plans to close both the Maternity and A&E departments at Macclesfield General as part of the same cost-cutting measures.

NHS Bosses declared a 'public consultation' then went to great lengths to make those 'public' meetings as inconvenient as possible announcing the location at the last minute often timed when most people would be at work.

It was total manipulation with the outcome predetermined before the consultation process even began. What they hadn't anticipated was the depth of outrage in the community and the commitment and determination of campaigners who organised group transport at a moment's notice wherever and whenever meetings were held.

National press exposure and a massive 50,000 signature petition finally persuaded Health chiefs to back down. The idiocy of ferrying urgent cases down the A6 in rush hour with the resultant loss of life was a banner headline they were not prepared to risk.

Yet here we are again with the same old secrecy and the same old assurances we were given in 2005. Had it not been for the perseverance of the local media and the determination of campaign groups these same plans would have been instituted before anyone even knew about them.

Is it logical at a time when politicians are destroying the green belt to accommodate population growth that we downgrade our health care facilities forcing more ambulances onto increasingly congested roads?

Where's the joined-up thinking? You don't increase the number of train carriages and reduce engines at the same time. Unless, of course, you are simply solving one problem by creating another somewhere else.

I'd like to take the STP at their word and believe there are GENUINELY no plans to downgrade facilities at Macclesfield General Hospital. Given my previous experience, however, I think it would be extremely unwise.

Vigilance is the key.

Brian Braybrooke
Hi Talking about Hospitals and Medical Matters have you read or heard about the "latest Edit" from some Quango in Cheshire That with regard to " Repeat Prescriptions" that you need for continuing your Medication THAT in future you will not be able to contact your Pharmacy that does the repeat Prescriptions for you , you will have to visit your doctors Surgery to obtain a repeat Prescription Form or leave your request in a box inside the Surgery This will come into Operation from January 6th 2017 , there is no reason given for this and it will cause such a lot of effort for people who are infirm and elderly to get to the Doctors Surgery during opening hours instead of being able to pick up the phone to your usual Pharmacist to order your repeat Prescriptions, surely an explanation is required WHY this procedure has been changed and has worked for so very many people this affects the whole of east Cheshire and may be beyond it certainly affects Wilmslow and Alderley Edge , What can be done ????!!!! to change this Edit and bring back the old and tried system , I feel so sorry for all the Old and Infirm Patients and probably lots of very busy people who rely on this service ?????

Sandra Cox
I believe the ordering of prescriptions from doctors' surgeries only is because there was so much wastage when ordered via the pharmacies. Patients were often over-subscribed and this was costing the NHS hundreds of thousands of pounds annually in this region alone. Most pharmacies offer a delivery service which should help those who cannot cope with the new system.

Sandra Cox
I believe the ordering of prescriptions from doctors' surgeries only is because there was so much wastage when ordered via the pharmacies. Patients were often over-subscribed and this was costing the NHS hundreds of thousands of pounds annually in this region alone. Most pharmacies offer a delivery service which should help those who cannot cope with the new system.

Brian Braybrooke
Hi Sandra, Many thanks for the explanation, but it still involves having to visit the Surgery during their opening hours AS they will not accept "Repeat Prescriptions over the Phone "

Brian Braybrooke
PS our Doctors have a checking arrangement for all Prescriptions that come into the system and they are very thura , and make sure people do not order too soon or too much , it doesn't help people who are Carers to have to get to the Doctors Surgery !!!!!

Sandra Cox
Brian - I understand your concern but wonder if anyone finding it very difficult or impossible to get to the surgery could do as my Mother did when she was no longer allowed to drive. She posted her prescription to the surgery (maybe a friend/carer/neighbour could do this - my Mother had a postbox at the end of her drive!). The surgery telephoned it through to the local pharmacy who then delivered it to her. Perhaps at least posting the prescription would save one journey. I wonder if there are special exceptions for the housebound, as the proposed changes are reverting to the old system which must have had safeguards for the vulnerable?