'This issue is firmly on the radar for the Beat Team' 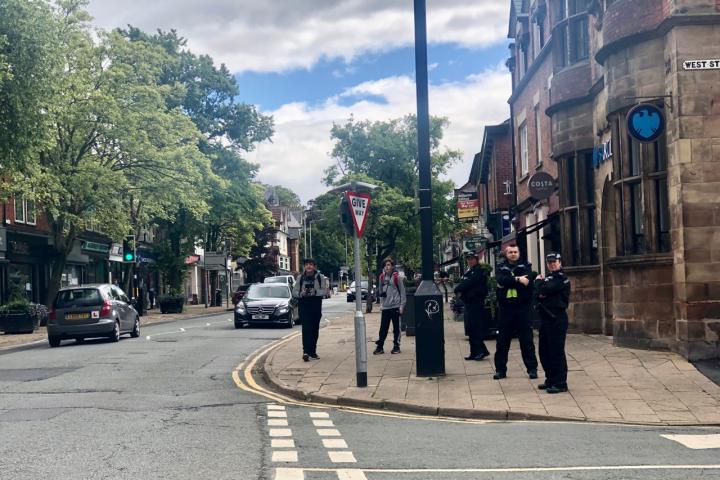 Following recent reports regarding the supercars which visit the village a team of local police officers were in Alderley Edge to pay more attention to the issue over the weekend.

Police Sergeant Lynsey Jackson and her colleagues were on London Road on both Saturday and Sunday to monitor the situation and said the feedback they received was positive.

Sergeant Lynsey Jackson told me "The photographers have said themselves that the drivers are driving more responsibly and that is good to see, the question is, how do we solve this issue without the Police being there, as we are not able to be there all the time.

"As we discussed on Saturday, we do not want to put people off coming to the village, but what we want to encourage is safe and considerate driving so everyone can enjoy what Alderley Edge has to offer.

"I am keen to explore with the assistance of partner agencies, the council and highways the options that they can suggest and work collaboratively to solve this issue. Of course the Beat Team will pursue any offences disclosed positively.

"I will also look at the CCTV to see if there is a potential to utilise this in a way that enables us to pursue any dangerous/inconsiderate driving."

Additionally two speed enforcement vans were on the A34 on both Saturday and Sunday during which two vehicles were caught speeding along here and the police are looking into alternative ways of monitoring speed.

Sergeant Lynsey Jackson added "Officers spoke to drivers where necessary and advised them why we were there and also regarding the manner of driving if this was suitable.

"Officers also conducted speed monitoring that did unfortunately show that motorists are exceeding the 30mph speed limit on Wilmslow Road. Those drivers caught speeding will be notified by post.

"This issue is firmly on the radar for the Beat Team and we will continue to monitor the situation."

I have written to Sgt Jackson to thank her and her colleagues for responding to my request and for their increased visible presence in our village over the weekend. Clearly, Cheshire Police have a major role to play in helping us to address the issue of persistent, anti-social and reckless driving by a small minority; however, Cheshire East Highways also has a role to play in supporting the police, including through the introduction of traffic calming measures. In receiving feedback from Sgt Jackson this morning, I was pleased to hear that many residents had spoken to her of their support for traffic calming in the village centre. A report setting out the various options will be considered at a meeting of the Multi Agency Action Group later this month and I will give a further update following that meeting.

Stewart Dyer
Thanks for getting involved, and for all your hard work on this Craig. Yet another issue on your very busy radar, including your role as a TV celebrity!

Pete Taylor
I hope this issue really is on the radar: there have been cars screaming and banging along the bypass for two hours this evening.

Tony Haluradivth
I dream of seing one taken out by stinger pete ;)

Andy Brown
I am hoping that the "peak" of the supercar parade over the late May Bank Holiday weekend simply coincided with the easing of lockdown restrictions and the good weather.

As a resident with a property bordering Wilmslow Road (B5359) it was pretty much non-stop for 8 hours or more and once you've heard one loud exhaust it gets incredibly tiresome.

That being said it seems heavily weather dependent and the weekend just gone, with persistent rain, did keep the majority away.

I know many residents of Alderley Edge have enjoyed the unintended consequences of the lockdown i.e. the very quiet roads. I'm hoping a solution can be found to slow the traffic down through the village but not cause traffic jams at either end.

Jeremy Levy
The A538 link road between Hough Lane and the A34 has become like a racetrack, this road leads to Wilmslow high school.
The speed the cars drive up and down this road, it won’t be long before we hear of a tragic accident, please reduce the speed limit.
Prevent accidents!

Donald Strathdee
Personally do not agree with suggested traffic calming.
A reduced speed limit of 20 mph through the village could be more effective if combined with speed detecting cameras linked to the village cctv and with fines for speeders.

Andy Brown
Reducing the speed limit will achieve nothing.

The current speed limit is 30mph with the highest speed recorded being 97mph!

Jane Hall
Definitely don’t agree with introducing traffic calming measures such as speed humps through the village. At great expense to the council and therefore the rate payers but more importantly this is the main London Road where the emergency vehicles need to pass through. The last thing they need with a head injury on board or a heart attack with vital seconds being lost driving over and negotiating speed bumps. Nor would a speed limit of 20 mph be appropriate. Most of the luxury cars cruise through the village slowly so the young boy enthusiasts can get their photos. It is the race track noisy exhausts that are the issue.
The Department of Transport were trialing ‘acoustic cameras’ from 2019. These cameras use microphones to detect breaches in noise limits and can capture the image of a vehicles registration number. Drivers would then be fined in a bid to tackle noise pollution. Perhaps Alderley Edge would be a good village to trial such a camera? There is no formal noise limit in the UK but noise exceeding 90 decibels is regarded as a nuisance.

David Carey
Not convinced having traffic calming in the actual centre of the village is the answer. Speeding on the outskirts of the village is still very problematic. The noise is however a massive problem and how this is properly captured evidence wise and how drivers are then brought to account is a different matter.

Verity Williams
I totally agree with Jane it’s so important to look at a solution that will actually fix the problem. If the problem is noise, the solution won’t be about reducing speed as excessive noise can be made when stationary.
Again, and I can’t say this enough (to somewhat deaf ears), of the 27 accidents in Alderley Edge from Sept 2016-19, only one had speeding as a contributing factor. 26 of 27 accidents happened within speed limits. Whereas 13 of 27 had failing to look properly as a contributing factor. Speeding drivers aren’t crashing. The people crashing are within legal limits but not looking properly. Targeting speeding may be an easy way for the police to make money, and councillors to appear to be doing something to address common complaints, but it’s not addressing the common factors affecting road safety.

Pete Taylor
Saturday 14:00, I can only assume that today’s cancelled Le Mans 24 hr race has been relocated to the A34. Dreadful racket.

Chris Jones
Craig Browne
Why on earth are you writing to Sgt Jackson cap in hand thanking for a Police presence.
We are paying through the nose with extortionate increases year on year for a substandard Police force. The least they can do is provide a presence.