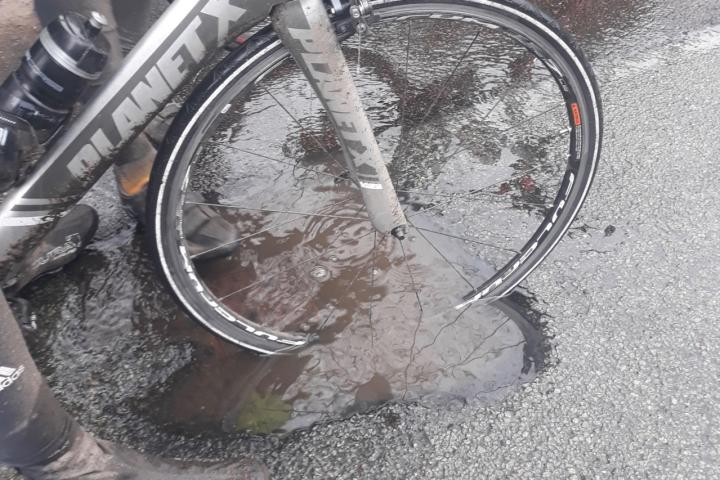 A cyclist was awarded a four-figure payout by Cheshire East Council after his bike hit a large pothole 9cm deep, sending him crashing to the floor and injuring his back, side and shoulder.

John Whittle was cycling along Mottram Road in Alderley Edge when the accident happened. He didn't see the pothole, which was filled with water.

JMW Solicitors who represented John Whittle said Cheshire East Council failed to inspect the pothole for three days after it had been reported and denied liability. However, the Council instructed its legal team to offer a settlement payment once court proceedings were issued.

John Whittle said: "I've been a cyclist for many years, so I'm used to looking out for potholes given the atrocious state of the roads - this one was filled with water, so I didn't see it and before I knew it I was on the ground, having injured my back, side and shoulder. The injuries caused me issues at work for several weeks and were obviously very painful, but it could have been much worse.

"It's disappointing that the council took so long to investigate the pothole, putting more people in danger."

Nadia Kerr, Partner at JMW Solicitors, said: "This accident has exposed serious failings in the way dangerous potholes are inspected - the clock should start ticking as soon as a pothole is reported, but in reality, it can take days for an inspector to assess it. A 9cm-deep pothole has the potential to cause serious injury - this accident was nasty but it could have been much worse - particularly if John was sharing the narrow road with vehicle."

Following their investigation, JMW revealed that John's accident wasn't the first; a cyclist had already been injured in the same spot and had reported the defect to the council. The report produced after the first accident referred to a "deep" and "dangerous" water-filled pothole and also referred to the cyclist having come off his bike. The law firm believes that, had the Council correctly identified the pothole as requiring urgent inspection and repair, John's accident wouldn't have happened.

Nadia continued: "The Highways Policy needs a careful re-think to make sure that dangerous potholes like this one are inspected much sooner - lack of resources is not a defence. Cyclists risk injury every day but councils must do more to prevent accidents like this - or worse. Until the Highways Policy is changed, the number of compensation claims will continue to rise, and cyclists will continue to be at risk and sustain injuries which are preventable."

David Carey
The pothole situation has clearly been a disaster for ages. Loads of people now cycling around as I am, and lots of potholes appear to be marked for action. Sadly, it takes someone to get injured before the Highways Policy is reviewed. Incidently, I have reported dangerous potholes, e.g. Trafford Road, but I know it took many weeks for it to be done?

Bob Bracegirdle
I agree. I've reported dangerous items before now and on two occasions reported back to me as having been done when they weren't. Outsourcing is half the problem.

Not as serious but I'd love the price of £900 worth of tyres ruined by potholes on my car. They always say which one, when there are dozens or more likely culprits.

Jill Millen
There’s one as big as this on Holly Road South near London Road junction, I’m amazed there hasn’t been a serious accident to date, car tyres are ruined daily!

I was keen to establish the date that this unfortunate incident occurred, because it is relevant to the question that has been asked in relation to council policy. Cheshire East Highways have confirmed to me that it happened on Saturday 26th January 2019 and that the pothole was repaired the following day.

Mottram Road was included in the Council's Level 2 (patching) programme for 2019/20, with the works being carried out between 22nd and 29th October 2019. On 4th February this year, the new cabinet at Cheshire East also approved a policy change whereby pothole defects will be investigated and repaired at a shallower depth (40mm) than previously.

In an attempt to deliver meaningful improvement to the borough's road network, the joint administration has this year taken the decision to invest an additional £5m (an unprecedented sum) in the annual road repair programme. This will more than double the number of roads that will be able to be repaired across the borough during 2020/21.

Jon Williams
Yes, but you don't repair them successfully do you, if I report three holes next to one another, what happens, they repair one or two, water/weather gets under the other holes and then the whole area need doing again.

Vince Chadwick
They don't repair them, they just fill them and in no time the filling fails and they need doing again. What it needs is the damaged area cutting back to a rectangle and the road making good again.

Doing the job properly takes longer and costs more in the short term, but just filling them time and again not only means the problem keeps recurring, it also costs a lot more in the long term to keep doing a bodge job over and over again instead of doing a proper repair.

Nadia Kerr
Craig, I dealt with this case and the main issue was that the pothole defect was reported to the council BEFORE my client had his accident. The council then failed to inspect it promptly to categorise it. When it was inspected it was given the most urgent repair status and it was then repaired. But my client had been injured between the report of the defect and the inspection/repair. Cheshire East had no written policy about time frames for conducting inspections after someone has reported a defect. Nadia

Duncan Herald
I'm sure 40mm deep is better than whatever depth was formerly used.
But 40mm is still 1.5 inchs deep; is that acceptable?

Is the width of a pothole also taken into account?
If so, what is the minimum width that ensures rapid repair?
Also is there a width or width/depth combo at which the road is repaired, rather than simply being given a fill-in?

Thanks for your question. Here is a link setting out the types (and depths) of defects that will be investigated and repaired under the new policy. No reference is made to the width of any defect, but you will see in the document that the location (e.g. distance from the kerb) is taken into account: https://www.cheshireeast.gov.uk/pdf/highways/well-managed-highway-infrastructure/investigatory-levels.pdf

For completeness, I should also explain that there are three levels of repair: Level 1 - pothole filling (these repairs are only intended to be temporary, pending further work ultimately being carried out under Level 2); Level 2 - carriageway patching (where a section of road surface is dug out and re-laid); and Level 3 - carriageway resurfacing (full resurfacing, surface dressing, micro-asphalt).

The additional £5m investment I announced above will go exclusively into Level 2 (£4m) and Level 3 (£1m) this year, rather than into temporary Level 1 repairs. Level 1 repairs are an ongoing (revenue) cost, whereas Levels 2 & 3 works are funded from the capital budget and because of this (other than in an emergency) they have to be included in a programme at the start of each financial year.

Fiona Doorbar
Maybe the remainder of Heyes Lane can be sorted out with funds as less than half was sorted last year as it is a major artery to and from the village!? A little misleading to state that the whole of the road was ‘fully resurfaced’

Brian Trafford
I have just reported, with a photo, a large pothole 10 to 20cm deep on the cycle path on Melrose way, under chelford road bridge, the lane going south. Let's hope they repair it soon before someone takes them to court. The council were very helpful, I understand the pressure they are under.

John Blake
Cllr Browne
I would like to know if the government announcement last week for additional funding into highways particularly pothole repairs is in addition to the £5m the council has announced?

Thank you for your query. The allocation of an additional £5m from the council's own budget was made prior to the announcement of further funding from central government. At this time, we are still waiting for the government to confirm any criteria or restrictions on how this funding may be spent. It is possible that some or indeed all of the funding may be able to be spent on level 2/3 repairs, but equally it is possible that some may be restricted to active travel schemes such as improved cycling or walking routes.

Following last summer's unprecedented flooding in Poynton, Bollington and Nantwich, Cheshire East had to divert £3.2m from the road repair budget to pay for emergency infrastructure works. As a result of this, several road repair schemes that had originally been programmed for 2019/20 had to be cancelled or postponed. It is likely therefore, that some of the additional funds announced by central government will go into supporting schemes that were originally going to be delivered last year.