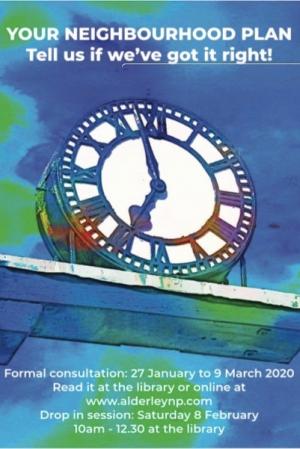 The Alderley Edge Neighbourhood Development Plan (NDP) has now progressed to the next next stage.

Residents now have the chance to have their say on the proposals being put forward for housing development, car parking, protection of green spaces, the local economy and infrastructure in Alderley Edge during another Formal Consultation which commenced today (Monday, 27th January( and runs until 9th March 2020.

During the last informal consultation, in August and September 2019, the residents and businesses of Alderley Edge gave their support to the Neighbourhood Development Plan (NDP), there was one proposal where a consensus was not reached.
Although 72% of the 186 people who responsed via the questionnaire agreed with a quarter of the Heyes Lane allotments adjoining the Festival Hall being used as a car park to support the viability of the Hall, with the remaining three quarters remaining as green space, a further 121 letters were received objecting to inclusion of any car parking.

The comments and suggestions that were made have been considered and taken into account by the Steering Group when drafting this latest version of the Neighbourhood Development Plan.

Sarah Greenwood from the Steering Group commented: "We listened to the feedback from the consultation last summer, amended the Plan accordingly and we think we've got the policies right, but we need the Alderley Edge community to confirm that. The Plan is now at its next stage – a formal public consultation known as Regulation 14. We're grateful for all your support to date and even if you approved the Plan in summer 2019, we still need you to reaffirm your support again as the Plan cannot be passed without evidence of public support."

• Access a hard copy of the Plan at Alderley Edge Library, at the Festival Hall, or by contacting the Neighbourhood Plan group at alderleynp@gmail.com.

Then please complete the online questionnaire which you can find on the website www.AlderleyNP.com.

Alternatively, you can fill in a paper questionnaire at the Library, send comments in writing to the Clerk at the address above or email alderleynp@gmail.com.

Full details of the representations previously submitted by Cheshire East Council, organisations, developers/landowners, residents and businesses, together with information about how the Plan has been amended in response to these comments, can be found on the NDP website at www.AlderleyNP.com

Speaking about what the NDP do and cannot do, Sarah Greenwood said "The NDP has no powers to block new housing development. That lies in the hands of Cheshire East Council. Their Local Plan specifies where new homes should be built, and if necessary releases Green Belt to build them on.

"What the NDP can do is say what kind of houses should be built – for example calling for more starter homes, affordable homes or for smaller homes for residents to downsize into. It can call for higher eco standards to protect our environment. It cannot deliver more schools, policing or medical facilities, but if new housing developments are being built then developers are required to contribute to invest in local facilities. If we have our Neighbourhood Plan in place then we will get more money to use in Alderley Edge than if we don't. So, getting the Plan agreed is very important for all of us.

She added "The Plan also provides support for the businesses of Alderley Edge. It protects our green spaces, sports and leisure facilities. It specifies where the residents would be willing to accept some additional car parking, which a majority still feel is much needed."

Sarah Greenwood explained what's next for the Plan, "After this consultation, the Plan will be reviewed in detail by Cheshire East Council, who will undertake their own consultation. The NDP will then be submitted for independent inspection and we hope the Referendum for the Alderley Edge Neighbourhood Development Plan will be later in 2020. If there is a majority 'Yes' vote, the Plan will be used to determine planning applications in our village from then until 2030."

Duncan Herald
In the 109 page document are many points.

One that interests me concerns an 'organisation' AECOM. The NDP document refers to AECOM as Consultants.
AECOM have produced 3 documents, from 3 commissions (see page 17).

The NDP plan says that the first AECOM document was commissioned by the Parish Council; there does not seem to be an account of who commissioned the 2nd and 3rd AECOM docunents.

Questions:
1. who are AECOM? Google says that AECOM is an American Multinational. Or are there more than one AECOMs? Such as a local organisation?
2. did AECOM do the works commissioned from them for free or at a reduced rate or were they paid a full fee? If a fee was involved, how much was it and who paid it?
3. why was (at least) the first AECOM document commissioned by the Parish Council? Is the NDP to be a joint effort by the NDP people and the Parish Council people?

I am not at all a critic here, I simply wish information.

Duncan Herald
No answers to 3 polite questions; such a shame!

Sarah Greenwood
Thanks for your interest in the Neighbourhood Development Plan (NDP) Duncan. Government support for NDPs is provided by an organisation called Locality (locality.org.uk). One of the services Locality provides is to carry out technical studies - into things like local Housing Needs. Locality subcontracts this work to specialist planning consultants, of which AECOM (aecom.com) is one. Their Manchester office is on Whitworth Street. Neither the NDP group nor the Parish Council has paid for the studies done by AECOM for the village. It was paid for by Locality directly.
The NDP group interfaces with Locality via the PC (I guess Locality prefers to deal with recognised local organisations rather than with individual NDP groups), so all studies were commissioned by the NDP group via the PC. My apologies if the wording caused confusion. We'll clarify it in the next version of the Plan.
The NDP steering group comprises a mix of individuals, all local residents, some Councillors, some not.

Keri Lamb
Such a vast document to go through and I have to admit I tend to focus on areas that I feel are important to our village. One of which is green spaces and to quote from a section
"To support the re-provision of a section of the park at Ryleys Lane to a proposed strategic housing site, to free up the proposed development of the area (or part of it), for extension of the existing public car park.
Please can you explain what that means? Are we creating more space for parking or building houses at the end of the park?
Thank you for all your hard work.

Sarah Greenwood
Hi Keri, the NDP would support more space for parking at that end of the park, not housing. Sorry if the wording is somewhat ambiguous, we’ll amend it in the next version.