'Contractor does not have permission for a full road closure' 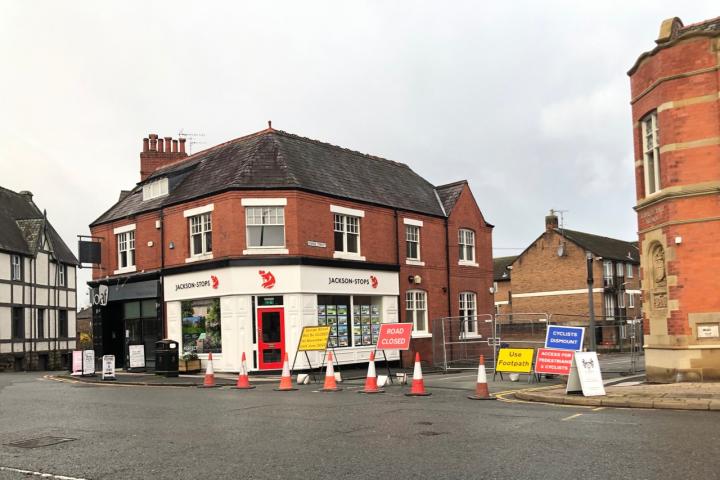 Cheshire East Highways will be addressing this situation regarding the closure of George Street as it appears they do not have permission for a full road closure.

The plans were for the road to be closed for 24 hours a day until towards the end of June 2020 - which has not gone down well with local residents and those who work in the village who say the work has also resulted in unacceptable noise levels and vibrations.

Bruce Emery said "In case you had not seen, heard or felt the earth tremors... the piling work has begun on the corner of George Street and one seriously has to wonder at what cost to the 120 year old buildings in our neighbourhood. Our staff have been really disconcerted by shake of our building with each thump into the ground."

However, it would appear that the contracor only has permission for a single lane closure so the Council will be intervening.

Councillor Craig Browne said "I have contacted the Network Manager at Cheshire East Highways today, to make him aware of the situation. He has reassured me that the contractor does not have permission for a full road closure and that as a compromise, a single lane closure only was agreed. Cheshire East Highways will be addressing this situation, which is entirely the fault of the developer's contractor, as a priority.

"Earlier today, I also took the opportunity to speak directly to the contractor and to advise him of this."

Simon Vaughan
I have an office on George Street, and the noise is definitely frustrating, but the arrogance of the developers to assume they can simply shut an important road for 8 months with no consultation and no regard for the residents or businesses is beyond my comprehension.

They've also clearly taken a much larger piece of the road than is necessary simply so they have somewhere to park their vans. Damn, if only we had thought of that...

Dave Clarke
If their is no authority to close the road completely why has it been closed on at least two occasions in the last week? The most recent today at lunchtime.