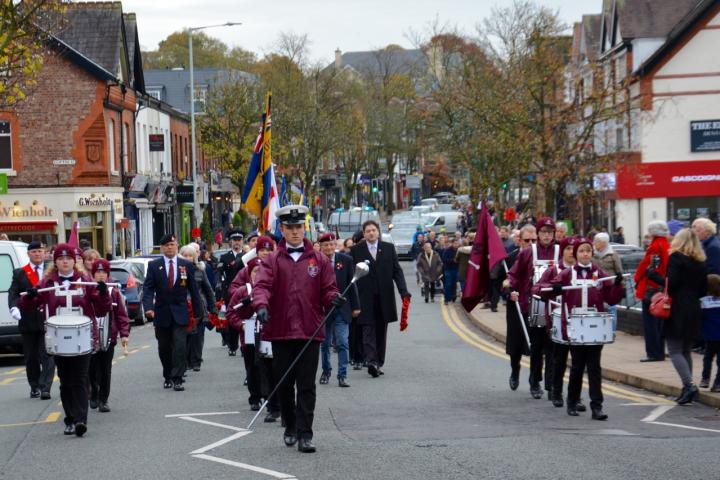 This year the Alderley Edge Service of Remembrance will be held at St Philip & St James' Church on Sunday, 10th November.

This will be preceded by a combined parade and wreath laying ceremony at the War Memorial on Ryleys lane.

The parade will assemble outside the Festival Hall at 2.15pm and will commence under the supervision of the Parade Marshall at 2.30pm.

The Deputy Lieutenant of Cheshire will be joined by members of the Royal British Legion, parish councillors and representatives of the clergy, British Red Cross, R.V.S, Wilmslow Lions, the police, Alderley in Bloom and the Union Club as well as guides, scouts, brownies and cubs.

They will all parade along Talbot Road, Moss Lane, Trafford Road and Chapel Road before turning down London Road and marching to Ryleys Lane for the wreath laying ceremony and prayers.

The Service of Remembrance will commence at St Philip & St James at 3pm during which the bugler will sound the "Last Post" and the "Reveille" and a two-minute silence will be held.

The Alderley Edge Union Club will open their doors on completion of the parade and service to all members of the community for refreshments.

Additionally on Saturday 9th November a one minute's silence will be observed outside Barclays Bank at 11am, those wishing to observe the silence are asked to arrive at 10.45am.

A Remembrance Service will also be held at St Marys Church in Nether Alderley at 10.30am on Sunday 10th November.