Request for monitoring of new one way system 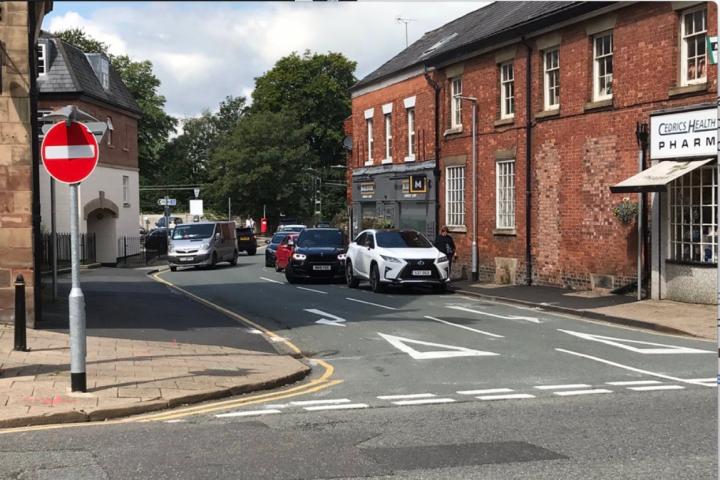 Councillor Craig Browne said "The scheme was funded through the Wilmslow Area Highways Group in 2018 and is designed to improve pedestrian and vehicle safety at the junction of West Street and South Street, which has effectively been a blind junction ever since Royles Square was completed. The condition of the kerb stones are evidence that vehicles regularly mount the footpath in order to negotiate this junction."

He added "I think most local residents are now aware of the new restriction; however, it is possible that occasional visitors to the village are not taking in the "No Entry" signs, because they are not expecting them to be there and are therefore effectively committing a traffic violation by driving the wrong way down a one-way street.

"I have written to our PCSO asking her to carry out some monitoring and awareness raising sessions on West Street in the near future, to help highlight the new restriction to drivers."

Nadine Morgan
I agree with this. I have just had to beep my horn at a taxi who went down it the wrong way! Don't even think he noticed it was one way at all. Even if they put out a yellow sign to say the road marking had changed - it might help the situation.

Susan Dawson
Good afternoon, the same thing happened to me the other day a car went down the wrong way, I even got out to explain to her the new traffic rules,but she became extremely rude towards me,so I left .

William Harris
A complete waste of time money and effort.

John Clegg
Well, Nadine Morgan, was it UBE*, L*nx, M*tro or one of the other non-too-locally-licensed private hire lot, who seem to operate on a different Highway Code to the rest of us?
I wonder if the copies that they used had pages missing, or maybe they might have just forgotten a few rules.

David Richmond
I had a spot of lunch locally and had the opportunity to watch the junction for a couple of hours. It seemed to me that almost nobody had realised that the priority had changed. About 20-30 cars went the wrong way with cars going the correct way still not using the right filter lane to turn right.
Our observation was that the signage is inadequate (the no entry signs are spaced too far apart) and no temporary signs to advise of the priority change. There were a number of angry exchanges as people attempted to point out where others had made an error. I'm really not sure what the point of this change was, it may have been better to simply remove a couple of parking spaces near to the junction to prevent congestion. There are, after all, 2 car parks within a few seconds walk.

Kelvin Briggs
I visit Alderley Edge village most days using South Street and West Street . Today there were two vehicles parked the wrong way having entered West Street illegally from London Road.
During the last week I’ve seen vehicles enter West Street illegally every day.
What’s the plan to stop this happening before an accident happens? No policing in evidence this afternoon .

Tony Haluradivth
Yes This is very common in the 2 streets Kelvin mentioned and both have been one way for many years however our observations have shown that going down the wrong way has been far more prevalent in the last few years. Indeed Mrs H sees one particular culprit entering the wrong way on a few occasions now and pleading ignorance doesn't wash. These idiots KNOW exactly what they are doing and they are entitled "chancers"