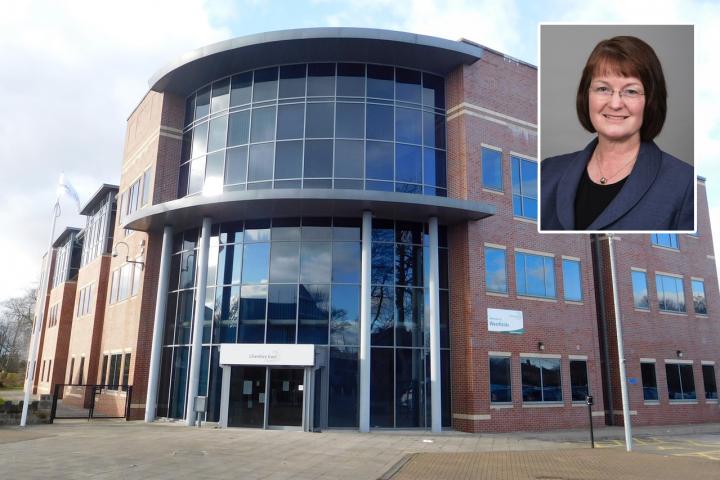 The newly elected Leader of the Conservative Group in Cheshire East has expressed her disappointment that the Independent Group have decided to join forces with the Labour Party to take control of the Council.

The Conservatives lost their majority on Cheshire East Council at the local elections on May 2nd for the first time since the council was formed in April 2009.

As a result the Conservatives now occupy 34 of the 82 seats, whilst Labour have 25, Independent candidates have 19 and Liberal Democrats have 4.

Cllr Janet Clowes, who replaced Rachel Bailey as Conservative Group Leader following her resignation last week, said "Following a week of intense discussion and negotiations with both group Leaders and defining a solution that was acceptable to both the Labour Group Leader and myself on Friday, the decision of the Independent Group to form a coalition with the Labour Party is clearly disappointing.

"It was evident throughout the Local Election campaign that residents are frustrated and angry over the failure of Government to deliver Brexit.

"We saw this on the doorstep and I believe it influenced many residents in the polling stations. However, voting on national issues has now resulted in many committed Conservative councillors, who worked tirelessly for their constituents, losing their positions.

"We now have in Councillor Corcoran, a Labour Council Leader at the helm who has openly expressed through social media, his opposition to Brexit and his ardent support for Jeremy Corbyn.

"Together with local Conservatives, I share the frustration of residents over the Westminster Brexit impasse but am deeply sceptical that hard-working Cheshire East tax payers in areas such as Knutsford, Wilmslow and Alderley Edge really want the hard-left in control of their Council.

"Through our Scrutiny functions we will ensure that the new administration is held to account and residents' best interests are represented."

Labour group leader Sam Corcoran said "It is disappointing, but not surprising, that the local Tories resort to negative personal attacks on the Labour Leader. Isn't it time we united to tackle climate change?"

He added "Politicians will disagree on many issues, but there are issues on which we can unite.

"Rather than talk about disagreements that came up during the election campaign, I want to talk about a significant area of agreement – Climate change. I was pleased to see a commitment in Conservative election literature to make Cheshire East Council carbon neutral by 2025. I was even more pleased to see that following a motion put forward by Jeremy Corbyn, Parliament declared an environment and climate emergency.

"We can tackle climate change and win, but it needs to be addressed on an international scale, a national scale, a local scale and an individual scale. Cheshire East Council and every resident of Cheshire East has a part to play in that. We can set the agenda. We can change behaviours. We can change minds and hearts. Or we can carry on as we are and change the climate for the worse.

"By acting together on climate change and showing leadership on this issue we can rebuild the reputation of politicians, rebuild our economy and safeguard our planet.

"I believe that climate change is the greatest challenge facing out generation and it is a challenge I intend to meet."

Nick Jones
Just a quick reality check Janet Clowes… You don’t deserve to be the CEC Council leader... It is not yours or Rachel Bailey’s gift to give… Similarly until the evidenced flawed cabinet system, and practice of CEC Companies paying its Cllrs / directors remuneration, neither does Sam Corcoran, but he probably will have a more open approach to change. The ‘tax –punished’, disillusioned voters suffered enough from CEC hollow promises, selective deafness, duplicitous conduct and Brexit aside; Wilmslow voters informed you ‘enough was enough’ and voted independent. Tory supporting residents suffering the most here! just review the CEC election results in Alderley Edge and Wilmslow ? they speak volumes.
Wake up and smell the coffee! Look to change! But remember even if you are tasked with the CEC Scrutiny committee role... you cant judge others differently to the way you performed collectively from Lyme Green / Co-Socious / ‘Flawed CEC Local Plan’ / Decimation of green belt / Physio-gate / Deliberate and systematic’ failures re; Pollution data / EIGHT ongoing Law enforcement investigations.. The public have spoken.
From Tax payer funded surveys, Bullying at CEC occurred on Michael Jones and Rachel Baileys watch. The work now begins to restore public confidence in its chosen representatives and improve credibility /value for money. So get on with delivering for the public who expect more from their locally elected representatives in the future than has been delivered in the past

Vince Fogharty
What a load of rubbish! There may have been a few voters swayed by national politics but you have not listened to the local residents for years, long before brexit was even a word! Your failings over the years and your refusal to change and listened is what has cost you the votes, your fate was finally sealed on the 5th March when you voted against a move to a committee system and move away from your closed door cabinets. Personally I am glad you were arrogant enough to vote against the change for transparency so close to the elections, because I fear had you voted in favour you may well have held onto control. I am sure you will have already seen, the new coalition are now implementing our will and transparency is coming!

David Smith
Well you would say all that - wouldn't you, Ms Clowes?
12 months of a change in 'management' will I hope unearth some past 'goings-on' that we will all find interesting to say the least.In the past I had friends tell me that Cheshire East Council was corrupt but didn't know what they meant. Perhaps we may eventually officially hear some facts to substantiate these rumours? There has been too much 'smoke without fire' and now the woodwork is creaking - so let's see what will 'come out' of it.

Tony Haluradivth
I didnt switch my vote from Tory to Independent because of Brexit or Climate change. I did it to curb corruption . I have full faith in Craig Browne. However Craig I urge you to not be taken in by the witterings and ramblings of that deluded Corbynista Sam Corcoran as I have equal contempt for them as a Party (don't get too big for your boots Corcoran some of us who voted Indie would never vote for a Marxist rag bag as Labour now are.) As an aside, the science is far from settled on man made climate change too. Yes the climate is changing but Anthropogenic Climate Change is a hypothesis and a blind faith to some hardline loonie adherents who wish to bring us back to Year Zero. I prefer my science from more moderate experts i.e Dennis Rancourt, Philip Stott and David Bellamy
https://en.m.wikipedia.org/wiki/List_of_scientists_who_disagree_with_the_scientific_consensus_on_global_warming