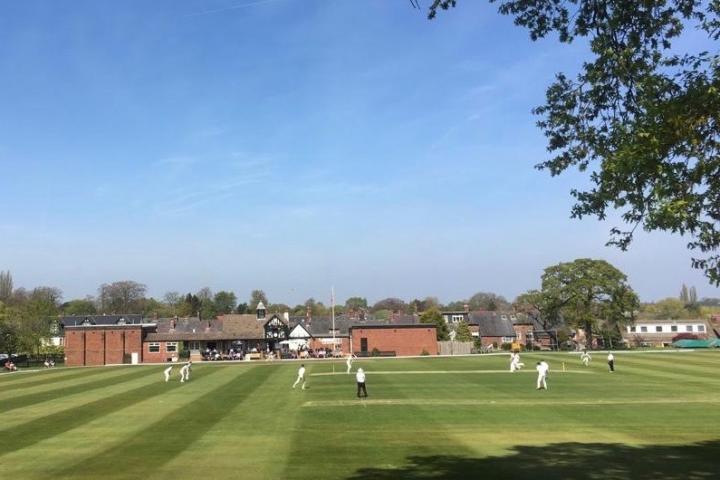 The Cheshire County Premier League season got back underway at Moss Lane on Saturday with Alderley Edge's First XI hosting the reigning champions Nantwich on a glorious early summer afternoon.

Opposition skipper Ray Doyle won the toss and asked Alderley to bat first where Nantwich paceman Jimmy Warrington immediately had the home side in trouble claiming 3 early wickets to leave the scoreboard on 25-4. Ed Fluck and Richard Wilkinson looked to be restoring some composure to the innings before Fluck became Warrington's 4th victim with the score on 42.

The introduction of spinner Ollie Griffiths saw further wickets tumble, Wilkinson resisted admirably while wickets tumbled around him eventually being the last man dismissed caught in the deep for 37. Alderley were bowled out for 88 with over 20 overs of their allotted 55 overs remaining. Warrington finished with 4-19 from 12 overs backed up by Griffiths' 3-19 from his 9 overs.

Alderley's seamers started brightly in reducing the visitors to 31-2 in reply with Wilkinson and Jake Hill taking a wicket apiece. But Nantwich made few further mistakes in chasing down the remainder of the under-par target, the end coming in a flurry of boundaries from Luke Robinson who hit four 6s in blazing 37 not out from 21 balls to seal 25 points for the reigning league champions crossing the line three wickets down with less than 18 overs gone.

Alderley's Second XI faced just as stiff a test in the reverse fixture against a strong looking Nantwich outfit at Whitehouse Lane. Winning the toss, home skipper Chris Simpson opted to bat first and helped himself to 77 from 86 balls as the home top order cashed in. Strong partnerships throughout the home side's innings left Simpson able to declare after 45 overs on 236-5, fellow opener Adam Simpson scoring 42 and number 5 David Ferris hitting a quickfire 40. Harry Elms finished with 2-51 from 12 overs for Alderley.

George Bell provided the platform for the early stages of the visitors' reply with 24 at the top of the order and at 51-3 Alderley were showing plenty of fight. However a superb spell of 6 wickets for just 2 runs from Ben Mogg ripped out Alderley's middle order, finishing off the visitors 124 runs short of their target in the 38th over. Bailey Sant provided good back-up with the ball registering 3-36, Elms completed a good all round performance with 28 not out for the visitors.