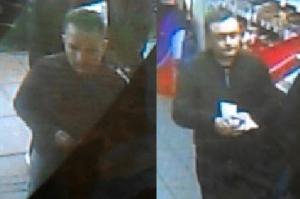 Police have released CCTV images of two men they want to speak to in connection with a distraction burglary at a garden centre in Alderley Edge.

The incident occurred at Lavinia Home & Garden on Knutsford Road at around 3pm on Wednesday 20th February.

A quantity of cash from the till and a shop worker's wallet were stolen.

A bank card in the stolen wallet was used soon after the incident to make fraudulent transactions at shops in Handforth.

Enquiries in relation to the offences are ongoing and officers believe that the men in the CCTV images may be able to help with their investigation.

They are urging anyone who recognises them or thinks they may know who the men are to get in touch.

Police Constable Jenny May said: "We believe that the men in the CCTV images may have vital information to help with our ongoing investigation into a distraction burglary at a garden centre in Alderley Edge and subsequent fraud offences in Handforth.

"If you think you recognise the men in the images or may know who they are please contact Cheshire Constabulary on 101, quoting IML 327710, give us the details or call Crimestoppers anonymously on 0800 555 111.

"I would also like to appeal directly to the men in the CCTV images to get in touch."