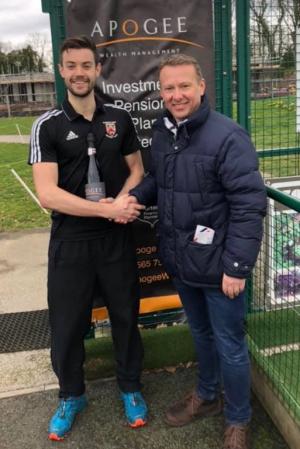 Four of AEHC's Ladies' teams were celebrating this weekend having secured promotion with two games still to play.

The Ladies 2s 7-0 thrashing of Sale 1s in North West division 2 was enough to see them through to the newly formed West Pennine Premier League next season. Meanwhile, wins for both the Ladies 4s and 5s against Timperley and Chester respectively in Cheshire League division 4 means they have done enough to ensure they will both play in division 3 next season. A hat trick from Jolie Lomas and two goals from Chloe Richards in the Ladies 6s 5-1 win against Neston 4s also means they are guaranteed promotion to division 4 next season.

A top of the D strike from stand-in Captain and Man of the Match Caitlin Polley sealed the Ladies 1s 1-0 away win against Whitley Bay and Tynemouth in the North Premier League. The Ladies, whose average age in this game was just 17.5 due to several senior players being unavailable, battled hard against a very physical and older team and are still in with a chance of promotion themselves if they play with the same grit and determination in their final four matches of the season.

Both the Mens 1s and 2s enjoyed fantastic games against Preston 1s and 2s despite Preston sneaking both wins. Edge played some excellent hockey in both games but were undone by their inability to optimise on several good chances on goal. However, 1s player Simon Parr was rewarded for his dogged efforts by being awarded the Apogee-sponsored Man of the Match award.

The 3s, however, notched up a great 2:1 win over Northop 1s in North West Division 3. Northop had been three points ahead of Edge in the league going into the game but this win now means they sit 3rd and 4th, both on 34 points, with everything to play for in their final three games of the season.