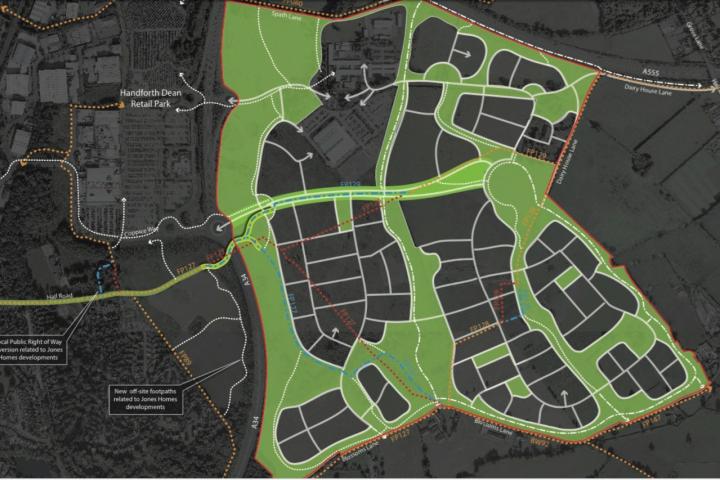 Cheshire East Council is holding a drop in consultation session next week about their plans for the new Garden Village at Handforth, which will contain around 1,500 new homes by 2030.

Local residents, councillors and interested parties are invited to Handforth Library during the afternoon of Tuesday 25th September where further information on the supplementary planning document will be available and officers will on hand to answer questions.

Cheshire East Council's Strategic Planning Board has approved the consultation draft of the planning framework for the site and on Tuesday, 11th September, the council's cabinet approved a suite of measures necessary to progress delivery of the village.

These measures include authorising the council's Executive Director of Place to enter into commercial, infrastructure and delivery agreements with other principal landowners and the successful tender developer. This will be funded from a £23m grant the council has secured from Homes England.

Cheshire East Council is consulting on the Supplementary Planning Document for the new Garden Village, which is to be built east of the A34 and is one of the government's 14 Garden Villages, from today (12th September) to 22nd October. As part of this they are holding a consultation drop in session to foster community engagement on the document from 3pm to 7pm at Handforth Library.

This document provides detailed guidelines against, which any planning application on the site will be judged, for the development of the new settlement which is included in the Cheshire East Local Plan, adopted in July 2017.

Plans for the 114 hectare site, which the Council currently owns 70% of, include 1500 homes, up to 12 hectares of employment land, retail units, a pub or restaurant, health facilities, hotel, sports facilities, community centre, children's day nursery and a primary school. Around the settlement green infrastructure is planned, including green corridors, country park style open spaces, sports pitches and allotments.

A spokesperson for Cheshire East Council, said " We want to hear the views of the local community and all interested parties to inform a final version of the document to be prepared later in the Autumn."

Full Documentation is on the consultation pages of the Council's website and there is further background information about the new village on the website of the Council's development company the Engine of the North who will act as lead developer on behalf of the council and will submit a planning application to deliver the Village Heart and infrastructure.

Councillor Jamie Macrae, chairman of Engine of the North, said: "Engine of the North are the custodians of the council's vision to create a truly sustainable and characterful new village for Cheshire East. This lifetime community will support its inhabitants as their lives grow and evolve, from first-time buyers to families, as well as older people looking to downsize.

"As over 40 per cent of the site will be green open space, amenity space and habitat protection, the Garden Village will not only be a great place to live but also somewhere for new and existing residents to come and enjoy their surroundings for generations to come."

Andrew Muncaster
As my wife and I visit the M&S/Tesco/Next complex a several times a month, it will save much time and money in not having to travel from Macclesfield. Just hope we can afford the little bungalow I hope will be built for us down-sizers. So many new developments like that opposite the Woodford Garden Centre appear to cater for folk with deeper pockets than ours.

Harry Martin
As much as I welcome new homes I find that public transport is drying up .Your report about the 130 bus to Manchester is another recent addition . Woodford development is growing . Wonder where the new health centre is to be ? Buses ? Nearest train stations are Handforth and Poynton which are quite a walk in bad weather .
Would be amazed to see the realistically priced bungalows maybe down sizing but not in price .