Several roads to be affected by bypass works 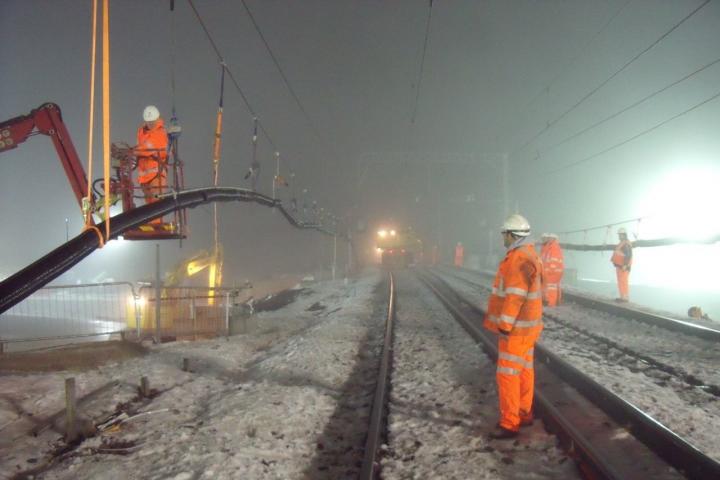 As reported last month the on-going construction of the A34 Alderley Edge bypass is running on-time and today Cheshire East Council have said it is also running on budget.

Having installed the new railway bridge during the Christmas holiday period, work is underway to construct three road bridges and a footbridge together with the new carriageway, surfacing, kerbing and drainage.

The new bypass, which is due to be completed by Spring 2011, will cost £52 million, with the majority of the budget (£48.4m) funded by the Department of Transport.

Cheshire East Council Head of Environmental Services, Phil Sherratt, said: “The work is moving along very quickly now. At this stage I am confident that the installation will remain on budget and on-time. Once completed, this long-awaited bypass will be an essential commuter route around Alderley Edge and Nether Alderley. I am aware that the work has caused an inconvenience to some drivers and local residents and I thank them for their continued patience.”

Cheshire East Council’s Project Manager for the Alderley Edge bypass, Doug Mackie, added: “Despite the cold weather, which has affected progress the civil engineers firm, Birse are striving to complete the works ahead of schedule. A lot now depends on the performance of utility companies who have major service diversions over the new bridges.”

The following local roads will be effected by the bypass works over the coming weeks:

Local residents are reminded that, should they have any queries, the site office is open every Wednesday morning from 9am until 10.30am. This is situated on Soss Moss Lane, Nether Alderley.

An evening drop-in session is planned for Thursday March 11th from 6pm until 8pm at the Methodist Church in Alderley Edge. For further information see our events calendar.

Lisa Reeves
We have received some additional information from Birse today regarding the closure of Brook Lane from Tuesday March 2nd for approximately 20 weeks.

"As with the previous closure of Brook Lane a signed diversion route will be in place via the A34 Wilmslow Road, Alderley Road and the B5086 Knutsford Road and vice versa.

As previous, access to properties on, or accessed off, Brook Lane will be maintained at all times. We will endeavour to maintain pedestrian access along Brook Lane during this time; however there may be instances where this is not possible. We will provide further information if the footpath has to be closed.

To minimise disruption the working hours will be restricted to 08.00 - 17.30 hrs Monday to Friday with no weekend working taking place."

Lisa Reeves
Birse have just informed us that Brook Lane will not be closing on March 2nd as previously announced.

A spokesman said "We have now reviewed the programme for Brook Lane bridge and propose to implement the closure on Mar 22nd, we will be working through the normal Easter construction shut down."

Brian McGavin
I was looking at progress on the A34 Alderley bypass recently and found that although there is now a good soil ramp for construction vehicles to pass from the busy Holmes Chapel to Alderley road onto the bypass and connect to the Wilmslow bypass, the council says there are no plans to make this link a permanent feature.

Many trucks and cars from the M6 use this route from the motorway into Alderley village and when the school run is in progress, there is a significant tail back.

It is crazy to lose the opportunity to divert polluting trucks direct onto the bypass instead of continuing into Alderley village, for the sake of a small extra construction cost to turn the access ramp into a road surface.

The Council says they plan to put truck route signs from the M6 Holmes Chapel, Alderley road to the Nether Alderley end of the bypass, but many vehicles will not bother with this longer diversion.

Has this issue not been raised by Alderley residents? It should be.

Stewart Dyer
I totally agree Brian - what use is a by pass that you can't get on to without a lengthy detour? This was raised on a number of occasions, most memorably at the public meeting at AESG, chaired by George Osbourne. The issue was dismissed by the council representatives with the declaration that there would be a weight restriction on Chelford Road/Ryleys Lane to discourage HGVs. For some reason they seemed to believe that this move would persuade the drivers to use the by-pass! It sounds like even that rather futile effort has been abandoned, or can someone else confirm that it is still planned? A major risk on Ryleys Lane is the massive trucks that thunder along there from the quarry, especially when the schools traffic is there.

Neil Carr
Seems like a no-brainer to me! And who would enforce the weight limit and would it be low enough to discourage the big HGV's?