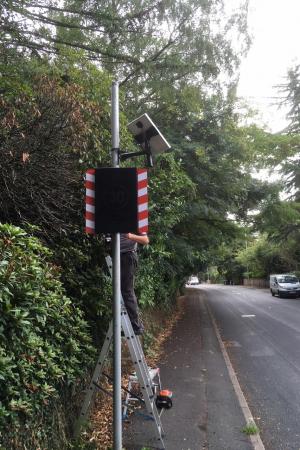 A new interactive speed sign, which has been purchased by Alderley Edge Parish Council, has now been installed on Congleton Road.

Councillor Craig Browne said "Assisted by our Parish Lengthsman Paul Redwood, I installed the new sign on Thursday morning and at the same time moved the existing speed indicator to its new home on Brook Lane. These locations have been identified as particular hotspots over recent months by our Community Speedwatch volunteers.

Later in the year the Parish Council will be purchasing another interactive speed sign, with the intention of installing it on Heyes Lane, which has also been identified as having a problem with speeding vehicles.

Volunteers from the Community Speedwatch team carried out a session on Congleton Road between 4pm and 5pm on Tuesday, 14th August.

Councillor Craig Browne said "Unfortunately despite our PCSO recently targeting this location with the Trucam and issuing speeding fines, the problem continues."

Their next session will take place on Thursday 30th August. If any local residents would like to join the team, please email Craig Browne.

David Smith
The only way to make someone drive to the speed limit is a fine of £500 for doing 35mph in a 30mph zone. Ouch! They won't do that again. I mean, speed limit signs are installed on the roads at significant cost, car manufacturers put an instrument displaying the speed of a vehicle right under the nose of the driver and when anyone takes their driving test they agree to abide by the 'rules of the road' should they pass BUT after a while some motorists think that these rules they agreed to abide by just don’t apply to them - only to others - and they can do what they like. The roads have become a playground and any law enforcer like the police are just out to spoil the fun. Parking your vehicle where it suits you is another example that is becoming a social problem around here and probably many other towns. One day we will all drive cars with systems that know exactly where we are. The speed limit at that instant will be displayed to the driver and if not complied with after a very short time, an instant fine will be debited form the driver’s motoring account. Further non-compliance will mean the vehicle will not start after it next comes to rest in a safe location. You might say that when we have driverless vehicles speed limits will be automatically followed, but I am not convinced we will EVER have this sort of motoring. The software for such a concept is just too complex to cover the safety of YOUR children who might be walking along the pavement. I might begin to believe it would be possible one day AFTER we have pilotless aircraft and driverless trains. I mean the railways are just a big train set with a stop/go sort of programming and should be dead easy to operate - but how far off are we having that system and would you get on a plane with NO pilot or even just the ONE who might die in flight after having had the fish - and then there will be none?

All modern planes can take off, fly and land without any input from a pilot. However airlines wont introduce this type of flying, because they have research telling them people wont fly on pilot less planes. Also fully automated trains already exist, Dubai being one place they are fully automated. Again it will never happen here, because the RMT would bring the network to its knees for years before they could be introduced, and our spineless MP's wont take them on. Look at the years of obstruction over them trying to get rid of the ticket collectors, oh sorry "guards". We need to accept the status quo will be here for years and years, as nobody has the balls in Westminster to make a long term decision.

David Smith
Hello Mark and thanks for the aircraft information. Which specific aircraft types are able to take off, fly and land without ANY input from a pilot?
Regards, Dave Smith.

David Hadfield
David Smith ….. what a great post you have written a couple of days ago. Thank you.
Very informative ….. and very interesting, thanks again.

Pete Taylor
@ Mark Russell presumably you have not had to get on a train with a wheel-chair? Assisting the disabled is one of the duties of the Guard. Is the Driver of a one-man train to be expected to leave his cab to assist at un-manned stations?

Incidentally driverless trains have been on the Docklands Light Railway in London for years; they have a Guard, who does ticket inspections and assists the less abled passengers plus safety work.