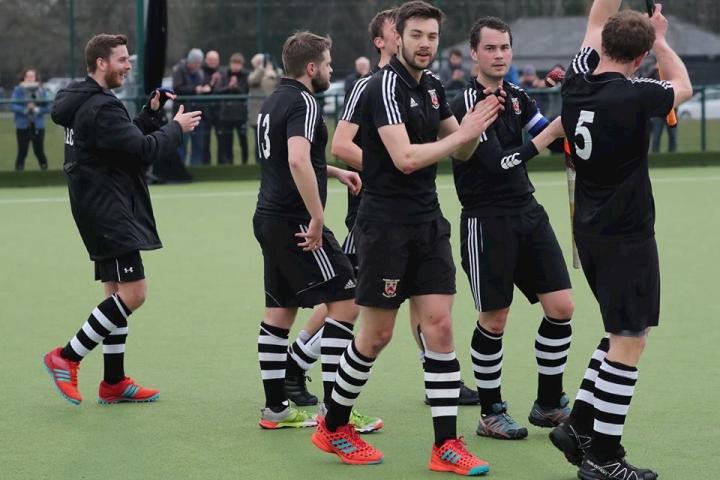 AEHC Mens 1XI are set for a promotion showdown with local rivals Didsbury Northern next weekend. Both teams drew this weekend's matches against Whitley Bay and Chester respectively and although Edge currently sit one place above Didsbury in the Premier League North, Didsbury have a game in hand. As a result, nothing short of a win next weekend will be good enough for Edge to secure promotion to the England Hockey's National League for the first time in the club's history. The match pushes back at 3pm at The Armitage Centre, Manchester next Saturday.

In what is hopefully a taste of things to come for the men next weekend in terms of results, an extremely windy and snowy Armitage Centre was the site of the Ladies 1s 3 – 1 victory over Didsbury Northern 1s in their North Premier League fixture.

In wind that gusted so strongly that it shifted the goals at one point, and in driving snow that made visibility challenging to say the least, Edge started well and went ahead after two minutes when Issy Reynolds-Duffy managed to sink a rebound off Didsbury's keeper. Twenty minutes of end-to-end hockey followed before Didsbury drew level after successfully converting a short corner. The second half continued to showcase some great hockey which culminated in player of the match Annie Hebb getting the final touch on two well-worked periods of attacking play. With two games left to play, the Ladies sit a very credible fifth in the league.

The Mens 2s came away from their North League division 2 game against Liverpool University with a deserved three points. With a mixture of youth and experience, Edge had the better of the game throughout.  Ex-Edge Keeper James Bateman was kept busy as Andrew Wood tested him with a penalty corner that went just wide and Joe Coxon also had several efforts on goal. The breakthrough came for Edge when the ever-industrious Jack Smith raced clear from a fine Matt Hardy through-ball and fired back across goal to score. Liverpool repeatedly tried to press back but were thwarted by composed play by Charles Barnes, Derek Cross and Max Ridings. Final score 1-0.

The Ladies 2s lost their final game of the season against Winnington Park 0-3. Although they would have liked to have rounded off the season on a high, their 1-1 draw with Lymm the previous week was enough to see them promoted out of Cheshire League 1 and into the North division next season – mission accomplished!

The Mens 3s enjoyed a 3-2 home win over Mossley Hill 1s to retain fourth place in North West division 3. A win in their final league game of the season next weekend against Neston 3s could potentially see them climb to third.

The 4s made the long trip to Colwyn Bay knowing that two wins from their final two games would also put them within a chance of a top three finish in North West division 4. However, with Colwyn Bay having been unbeaten at home all season and the apparent arrival of The Beast From The East's younger brother this was never going to be plain sailing.

The game started well with Edge playing with good possession and attacking flair, however they were unable to capitalise on this and Colwyn Bay looked dangerous on the counter and put the defence under a lot of pressure. Some great saves by Man of the Match, Ben Jagger and some resolute defending by Phil Benton and Ed Offer kept them at bay and the first half ended without score.

An Ali Smith strike was saved by Colwyn Bay's keeper early in the second half but was the dutifully followed up and dispatched by James Parkin to give Edge the advantage. Sadly, the response from Colwyn Bay took just 10 minutes and despite some fantastic play down the wing by George Muirhead and some dangerous runs through the middle by Dan Farrer, Edge couldn't find winner – final score 1:1 and all to play for against bottom of the league Neston 4s next weekend.
The Mens 5s went down 1-2 to Chester 4s, while the 6s ended what has been a challenging season for them on a high with a 6 – 2 victory over Sandbach 2s in North West division 7.

The Ladies 3s home fixture against Rhyl was cancelled as their opponents were snowbound. Despite their valiant efforts to play their final game of the season in Cheshire division 3 against Warrington, the Ladies 4s game also had to be abandoned after blizzards got the better of them at Kings Macc and then at The Edge where they had relocated to in an attempt to dodge the snow.

The 6s drew 1-1 against Neston 4s at Wilmslow High School in a game punctuated by a 15 minute 'blizzard break' and the young 7s made the most of sunnier weather conditions in Neston, beating their 5s 12 - 1.