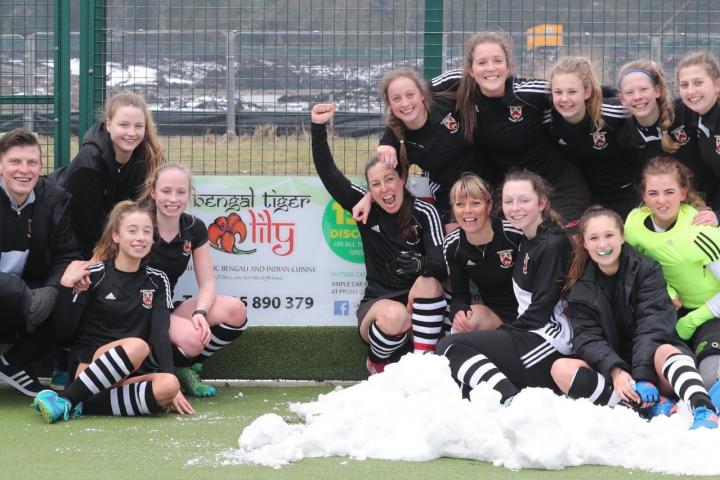 While snow decimated the majority of AEHC's fixtures this weekend, the Ladies 2s and the Mens Over 40s took the club one step closer to some coveted silverware...

After a week of what were, quite frankly, horrific weather conditions which resulted in the vast majority of AEHC's matches being cancelled, Saturday morning saw a loyal group of 20 volunteers turn out at 8am to clear the pitch of snow in order that the Ladies 2s could play their crunch Cheshire League 1 match against Bowdon. Their efforts paid dividends with Edge winning the top-of-the-table clash 3-1. This leaves them six points clear at the head of affairs and needing to win just one point from their final three games to secure promotion to the North league next season.

Both teams fielded strong squads and produced some exciting and fast-paced hockey belying the 0-0 half time score. Edge's Coach Sean Hadfield sent the Ladies out into the second half full of ideas and confidence which resulted in Sarah Hopkin executing a straight strike on goal from a short corner to take Edge into the lead after five minutes. Bowdon immediately challenged and pulled one back despite the best efforts of Player of the Match Olivia Moores.

The breakthrough Edge sought came with just minutes to go when, after yet another scramble in the D, Jude Offer managed to get her stick on the ball and take Edge back in front. The icing on the cake came in the final minute when Sophie Fox sneaked a goal to make the result conclusive.

The Mens Over 40s team had an equally successful day on Sunday. They progressed to the semi-finals of the England Hockey Over 40s Championship after beating Sheffield Bankers 6 -2. Bankers knocked Edge of the cup last year so, keen to take revenge, Edge took immediate control of the game with Scott Ashdown smashing a volley into the back of the net after some great work down the right by Danny Farrar.

The home team soon doubled their lead with a well improvised short corner dispatch by Julian Scarsbrook but then relaxed which allowed the visitors to capitalise on their limited possession and draw even going into the break.   After some strong words at half time, Edge came back out of the blocks flying with Ashdown soon getting his hat trick before skipper Matt Hardy and Phil Benton also added to the scoring.

The Ladies 4s were also beneficiaries of Saturday's snow clearing efforts and were able to play their Cheshire League division 3 match against Neston. With both teams in the relegation zone there was everything to play and this was certainly reflected in the tenacity and perseverance shown on both sides. A final score of 1-1 means that Edge will have to pull out all the stops next weekend against second in the league Sale 2s.

Edge took a while to settle with some new players in key positions and found themselves a goal down at half-time. However a rousing team talk saw them come out in the second half with renewed energy. This resulted in some great, but sadly missed, opportunities until Katy Smith managed to get the ball past Neston's keeper to draw level. A frenetic and nerve-wracking final 15 minutes then ensued with Edge refusing to give up. They thought their efforts had finally been rewarded when Katie Haszeldine found the back of the net but, agonisingly, the goal was disallowed.

The Mens 6s donned their snow boots and ventured to Crewe where they beat bottom of North West division 7 Vagrants 3s 2-1. The Ladies 7s were the only other team who managed to play this weekend and were rewarded with a very comfortable 5-0 win over Golborne 3s in Cheshire League division 6 which sees them retain their fourth place in the table.