Barlow's Beef: Will the real Bradley Wiggins please stand up 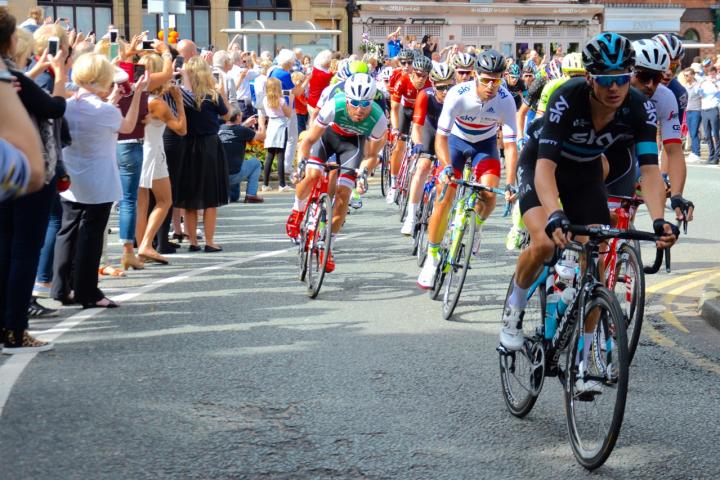 I had a great time at the Tour of Britain. I never knew the constabulary had so many motorbikes (I didn't even know they had that many officers). Boy, were they having a good time tearing up and down the road on their bikes like kids on Christmas Day.

I couldn't help feeling it was a great day to be a burglar. You could have stolen a grand piano without anyone noticing. It's hard to get Cheshire Police to turn up at the best of times but with all the excitement you could have played the entire works of Rachmaninoff before a bobby appeared.

What happened to Bradley Wiggins? I stood around all afternoon without spotting him. Mind you with all the gear these cyclists wear you don't really know who you're watching. For all we know Bradley could have been sitting in Costa Coffee and no one would have been any the wiser.

Oh yeah... what happened to the pelican? I was looking forward to seeing that. (Maybe it was in Costa with Brad?) And another thing... shouldn't these star cyclists be promoting road safety. Not one of them had a bell on their bike. Hardly a great example to set young children. What happens if someone steps out into the road?

Yelling: 'Sortir de mon chemin,' may work hurtling down the French Alps but won't get the desired effect at the Cat and Fiddle. The ringing of a bell is a universal warning so I suggest making it mandatory before un petit enfant est splattered sur La Tarmac.

I watched the race with great interest and with one small addition Team Sky could rule the world. If just one member of their team had a Raleigh Chopper he could give a backer to any team member who fell off.

Raleigh Choppers are great for carrying passengers and you can do fantastic wheelies going uphill. The opposition would be so mesmerised Team Sky would be gone before anyone realised what happened.

There were hundreds of cyclists in the race but (as far as I could see) not a single woman. If they can fight on the front line with the infantry I'm pretty sure they can ride a bike so where were they? Discuss.

I could not see why they needed dozens of support cars to keep all the cyclists on the road when the council left spare bikes for them at every roundabout. Surely the whole point of spraying these cycles yellow was to make them easily found in an emergency.

For the life of me I have no idea why the race organisers needed a helicopter. The cost must be phenomenal... you could probably pay-off three directors of Cheshire East with the sort of money it takes to run the Tour of Britain.

Now, when all the cyclists had gone and the crowd dispersed I walked into town and drifted into Costa Coffee.

You'll never guess who I saw sitting in the corner with a giant seabird...

Michael Orange
Great article. Definitely in the spirit of the entertainment on offer. Just a couple of observations: cycle bells, lights, or other appendages are not allowed on racing cycles other than in time-trials (at least not in my racing days many years ago) and the cycles have to undergo scrutiny before a race to check for such things. Women have their own races and are pretty good at it. In my day there was a lady, Beryl Burton, who would have wiped the floor with all but a handful of her male contemporaries over a period of twenty five years. We got off lightly when she was barred from competing against us. I once raced on a Falcon cycle, but don't remember ever seeing a pelican. Maybe I was suffering too much to have noticed. Allez les oiseaux!

Tony Brammer
Vic, the motorcycle police work on the race and are from constabularies from all around the country, but yes they were having fun and good for them