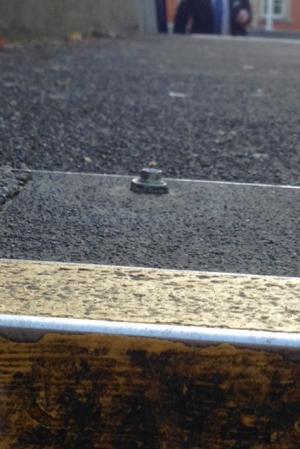 I travel by train from Heaton Chapel to Alderley Edge every day for work and I am sad about the state of the station, particularly when compared to my 'home' station of Heaton Chapel.

A couple of years ago I reported that some of the covering on the steps on the overhead footbridge was loose, and the current 'patchwork quilt' repair was the response. I have also reported several times the broken lamp that lights up the footpath and the car park and which is currently resting at a jaunty angle! I have no doubt that the clocks will change in October and once again the path will be plunged into darkness.

However I am on the case with that one, but I have also reported a more recent fault on the steps where I noticed that the top step on the top flight going down towards the northbound platform (trains to Manchester) was lifting up causing a trip hazard. I emailed to ask for it to be repaired, which is was, promptly (good!), but the repair has used a nut and bolt which protrudes from the step (bad!) and has had the effect of replacing one trip hazard with another! (photo attached).

I have of course reported it and hope that it will attended to promptly, but would like to remind people to take care on the steps and to use the handrail. The consequences of someone catching their foot and falling down the entire flight of steps could be serious.

David Hadfield
Very kind of you to point this out to us all .....
Many thanks indeed.

Vince Chadwick
Alderley Edge station is a disgrace. It must be the tattiest on the Crewe to Manchester line.

Is this an indication that orange people are not expected to use public transport?

One hopes the new franchisee (Arriva), responsible for the station, will address this as plenty of non-orange people do use the station.

Don't hold your breath, however.

Christine Munro
Hello Vince, We formed a Friends of Alderley Edge Railway Station in March this year and our first project was to provide new planters which you will see along the wall bordering the carpark. These were planted by Turners Nursery who supplied all the compost and plants free of charge. We also planted the 4 tubs on the station.
Our next project is working on the plot of land beside the platform which we are hoping to make into a community garden.
Network Rail have been very supportive of our initiative and have helped us with hands on help to clear some of the weeds and rubble.
If you are interested in the look of our station and would like to help us please get in touch. It will be a huge undertaking and we would be grateful for any help you or any other resident can offer.
Our aim is to make our village more attractive and a vibrant community minded place to live, but to achieve this we need support from everyone.
I am sure we are going to see an improvement very soon, and with your help that will happen sooner rather than later.

Vince Chadwick
I'm pleased to hear that, Christine. I wrote to Northern Rail (the previous franchisee) about the poor state of Alderley Edge station and didn't even receive a reply.

I would be happy to join your group but am already committed to voluntary work on the Mid Cheshire rail line.