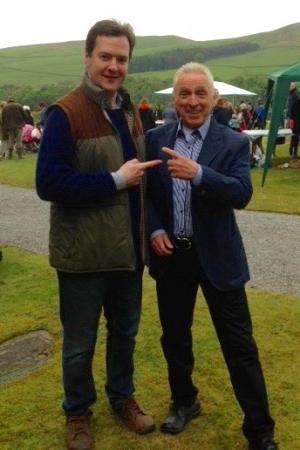 Like millions of people I love Adele's music. She writes her own material and clearly has an amazing talent. I used to wonder where her inspiration came from for such revealing lyrics. I now have the answer.

You want to know don't you? C'mon don't be coy. This will be your conversation stopper at every party this Christmas.

Adele's lyrics are all inspired by one person... George Osborne. Don't believe me? Let us examine the facts.

Remember when Mr Osborne informed us that cuts to benefits and services were essential to prevent Greek style economic catastrophe? No matter how important their job our economy could not afford to pay nurses, teachers etc a penny more than one per cent. It was a hard pill to swallow but sacrifices had to be made. He then gave MP's a ten per cent pay rise?

Rumour Has It: This is one of my favourite Adele songs.

And here's the telltale George inspired lyric: "Just coz I said it... don't mean that I meant it. Just coz you heard it."

When the Tories were forced into a humiliating coalition with the Lib Dems after failing to win an overall majority Adele wrote:

"I can't help feeling we could have had it all

Rolling in the Deep"

Where do you think she got those evocative lines from? George was gutted. Didn't stop blubbering for a week. Obviously he was rolling in something but it wasn't what he expected.

Then there's his relationship with Mr Cameron. It's been a treasure trove for Adele.

"Where you go I go.  What you see I see.  I know I'd never be me  without the security."

Is that Adele's Skyfall or a note to Dave?

Have you ever thought what the young inexperienced George said when the PM asked what sacrifices he was prepared make to get the job of Chancellor?

"I'd go hungry; I'd go black and blue,  and I'd go crawling down the avenue.  No, there's nothing that I wouldn't do...

To make you feel my love."

I wasn't there, obviously, but Adele must have got those words from somewhere?

All great artists have a stooge... or is it a muse? Gilbert had Sullivan, Fred had Ginger, Tom had Jerry and Adele has George.

You can't knock it. It's a winning formula.

Wait until you hear her HS2 album.

James Hadfield-Hyde
That is hilariously funny! it's the first thing I saw on my computer this morning. It makes a change to start the day with a laugh these days.

Andrew Muncaster
I hesitate to suggest you have too much time on your hands, Vic. But very entertaining, well done. I too look forward to the HS2 album.