Barlow's Beef: Thinking is for wimps 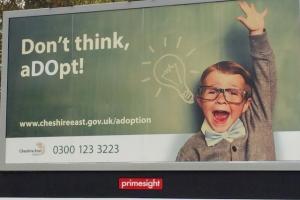 About this time of year animal charities festoon the country with posters telling people 'Dogs are for life not just for Christmas.' Bumper stickers appear urging owners to consider the commitment before acquiring a puppy rather than act impulsively.
So effective has been the campaign giving a puppy as a Christmas gift is akin to buying a gun for a child or spitting in church. It's just wrong.

I don't think many people would argue with that. Certainly no sane person would consider it acceptable to acquire a dog before assessing their ability to fulfil its long-term needs. We all know how easily acting in haste can turn into tears.

So imagine my surprise when I saw two enormous Cheshire East posters today carrying the picture of a small child with the slogan, 'Don't think, aDOpt!'

Some clever Trevor at Cheshire East got so carried away paraphrasing Nike's famous Just Do it campaign they forgot what they (CEC) were promoting. Either that or they have the sensitivity of a rubber cosh.

Who in their right mind would urge the public to adopt a child without significant deliberation? It wasn't long ago councils made it impossible for almost anyone to adopt. The process was sufficiently harrowing and intrusive to deter all truly desperate couples.

Suddenly our council are plastering photographs of children on roadside posters and encouraging us to adopt without a thought.

Is their no sensible ground when it comes to Cheshire East? Does box ticking take precedence over common sense? Just because 'Computer says Yes' does not make it a good plan.

One gets the idea that following the dictum of the day with a justifiable paper-trail is more important than having a sensible policy. Hence they swing from a lengthy and complex adoption process that alienated sound prospective parents to suggesting anyone and everyone should give adoption a whirl and think about it later.

Just as developing green field sites while ugly brownfield sites remain untouched makes no logical sense so a switch to casual adoption appears insane. None of these policies would be supported by the public but somehow they make sense in the council chamber.

Meanwhile those children unfortunate enough to need parents are being marketed like a brand of trainers.

Do you genuinely believe that no one in Cheshire East has the common sense to realise urging people to adopt a child without thought is the height of irresponsible stupidity?