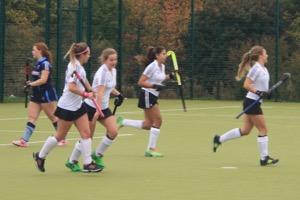 There's nothing quite like a good cup run to excite players and fans alike. Alderley Edge Women's 1st team were drawn away at Lancaster, a North League Division 1 Club, a North League Division 1 Club last Sunday in the Investec Trophy knockout competition and pulled off one of the shocks of the round. A thrilling 3-2 victory setting up a home tie against neighbours Wilmslow HC

Edge had a number of regular players unavailable for the match but those who stepped up from the 2nd team played really well looking very comfortable at this level. Lancaster played a defensive half court press the whole game and but Edge were patient and kept hold of the ball for long periods before pouncing to score. The Lancaster keeper made some fine saves restricting Edge to just three goals.

A thrilling match with England Under 16 forward Lily Wolstenholme scoring, Sarah Hopkin adding another from a penalty corner strike and Katie Austin, up from the second team, adding a third. 3-1 up with minutes to the final whistle, Lancaster reduced the deficit by scoring a penalty flick to set up an enthralling and tense last few minutes. Lancaster withdrew their keeper for an outfield player in a desperate search for an equaliser. Edge held firm and were unlucky not to add a late fourth.

The win sets up an exciting clash with local rivals, Wilmslow who progressed through to the next round when their opposition cried off. With both teams flying high in the league there will be a big crowd at the Edge to see the tie scheduled for Sunday 22nd November.

The Cheshire Women's league had a half term break so Alderley arranged a select team match against Scottish visitors Jordanhill. The side was a mix of U18s & U16s as so many girls were away at Futures Cup playing for the North. Edge were 1 nil up at half time through Tori Blackwell. Early into the second half the visitors got one back then took the lead. Alderley's second came from Gabby Marfani but Jordanhill managed to score again before Edge finished the match off in style winning 4-3 with goals from Julia Tennant and Nicola Hall.

Alderley Edge Men's 1st team put last weeks defeat to Oxton behind them and showed great second half spirit to turn around a 3-1 deficit to triumph 4-3 away at Bowdon 2nds. This win lifts Edge to 3rd in the Northern Premier League. Goal scorers were James Warburton, Ben Gregory who had a fantastic match, Simon Parr and Andy Power. A really competitive and intense second half performance with Captain Ben Whitehead outstanding in defence.

The mens 2nd team were 3-1 up against Windermere but were pegged back to a 3-3 draw. Missing four keys players, the 2's put in a dominant first half performance but a number of missed Alderley chances meant the scores were level at half time 1-1 with Edge grateful for a brilliant double save by keeper Simon Pickering from Windermere's first short corner.

Alderley were out of the blocks the fastest after the break and were 3-1 up with 20 mins to go. Unfortunately this kicked Windermere into life and they capitalised on some naive play from Alderley and drew level with 5 mins to go and the game ended 3-3.

The Alderley goals were scored from a powerful Joe Gregory finish from the right side of the circle, a first time reverse stick hit finish from Matt Hardy following a pass from man of the match Joe Coxon and a regulation Chris Hardy short corner. With players to return Alderley are well placed only two points off the top of the league Wilmslow 1st team.

Alderley Mens 3rds remain top of their league after a 10 win away at Bowdon 4ths. Edge created over 10 scoring opportunities before young Edward Fluck converted clinically. A solid late defensive performance saw Alderley hols out for the 1-0 win.