Barlow's Beef: Are we too lazy to clean up our own mess? 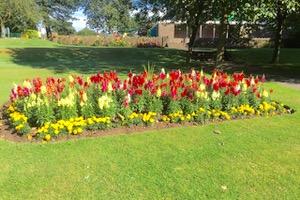 As a dog owner I visit a lot of local parks and often marvel at the amount of work needed to make them such a welcome relief from the expanding urban environment. What's more astounding is the small number of staff employed to carry out this maintenance.

They must work like Trojans to keep pace with the changing seasons. I know many of the staff have dedicated most of their working lives to Cheshire East parks and gardens.

So it must be extremely demoralising for them to find the mountain of cans, cartons and general trash dumped in the parks every weekend. I counted 16 bottles left within ten paces of a waste bin today. Why anyone would throw something as dangerous as a glass bottle into long grass near a child's play area is beyond my comprehension.

I've seen dozens of canisters of what police refer to as 'legal-highs' discarded in The Carrs along with the remnants of picnic barbecues and wine bottles. As the urban sprawl intensifies our parks will be the only retreat for an increasing number of residents and unless we change our ways they'll be awash with broken glass and toxic waste.

It isn't just dog owners who leave waste behind, as any playing field will testify. The day after a football match you will find enough plastic bottles and rubbish to fill an entire lorry.

Seems like everyone expects someone else to clear their rubbish. 'They' should do something about it,' is a common complaint. I doubt anyone stops to consider that the 'they', to which they refer, are council grounds men who spend months draining and mowing the grass now used to dump trash.

The lack of respect for their endeavours must be soul destroying.

Over the summer holidays I've seen kids' play areas so festooned with broken glass, crisp packets, plastic bottles and cans I wouldn't allow my dogs near them let alone children.

Why are we desecrating our own environment? Are we too lazy to clean up our own mess or have we created a society where no one is responsible for anything and everything is someone else's fault?

I did notice on a TV programme that Chinese schools expect students to clean their own classrooms. I thought it quite a good idea until one of our park rangers told me they used to have teams of children volunteering to help litter-pick but it was considered "too demeaning".

Sometimes I do believe we have lost the plot.

John Concannon
It may have to be the case that those more responsible amongst us clean up the mess left by others. I certainly do along the highway in front of my house and in any public space where a bin is convenient. You get strange looks sometimes or they could be looks of admiration!

Vic Barlow
Yes, I carry a spare bag to pick up the dog poo bags left behind by owners too lazy to take them to the nearest bin.
Dogs are extremely clean animals and will never dirty their own space (given an option) but they get a terrible reputation simply because some owners just can't take the trouble.

Jonathan Savill
I don't understand why people, having made some effort in bagging their dog's "produce" would not go on to carry it to the nearest bin.The latter part of the task seems less effort than the first.

By leaving it in bags on display on fence posts , trees etc is bizarre, do they imagine that the fairies (or Vic) come along in the night and remove it for them?
Otherwise are they doing it deliberately to be anti-social; a symbolic two fingers up at society because they don't feel that clearing the mess up is their responsibility.

Claire MacLeod
I wish there were dog poo bag receptacles on The Edge. I'm happy to clean up after my dog but would prefer not to have to carry the offensive smelling bag back home with me in the car. I'm sure there's a reason why there aren't, but I suspect there would be far fewer poo bag 'tree ornaments' if there were bins available to put the bags in. It's not an excuse. Just an observation.