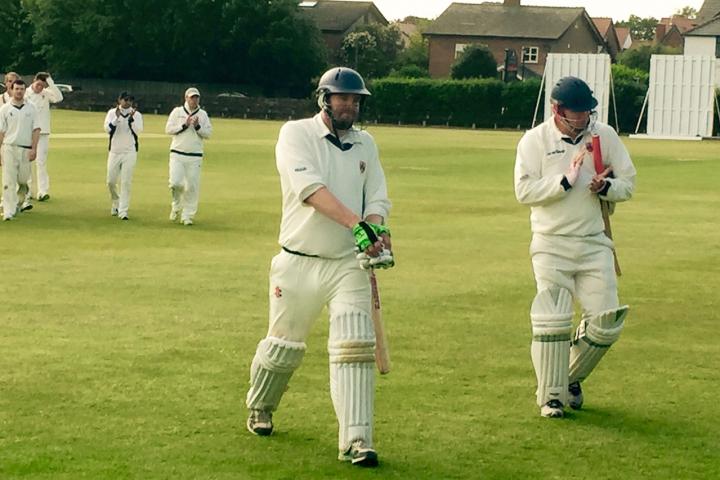 Alderley Edge 1st XI came within a whisker of opening up a 10-point lead in the Cheshire County League Premier Division on Saturday when ending up a tantalising two runs short in a run chase against Marple.

A look at the scores – Marple 207-4, Alderley Edge 205-9 – suggests an even contest, but in reality Alderley, because of multiple rain breaks, only had 34 overs compared to their opponents' 48.

In the first innings Marple batted better than their lowly status in the league table suggests, with Morgan and Makin both scoring very good half centuries. With the reduced number of overs available, Alderley set off in pursuit with both openers, Calum Rowe and Alan Day, making 50s.

However, the innings was always just slightly below the run rate of 6 an over. The game looked like it was heading for a draw until Sean Sturrock slammed 3 sixes and a four in the penultimate over leaving just 6 runs required. But the wiles of canny experienced off-spinner Andrew Greasley limited Alderley to just 3 runs, while 3 wickets went down. Despite coming so close to victory with 14 overs fewer to bat, the points tally was 14 to Marple and 7 to Alderley! Where were Messrs Duckworth and Lewis when we needed them? Congratulations should go to Alderley trio Calum Rowe, Alan Day and Adam Worrall for their selection for the Cheshire team in the match currently being played against Wales.

Happily the 2nd and 3rd XIs both pulled off successful run chases against Marple and Wilmslow respectively. An undefeated half century for 2nd XI captain Jon Usher proved to be a match-winning effort in a tight 2-wicket win, though Marple's lowish total of 143 all out was brought about by an exceptional spell of 28 overs 6 for 52 from spinner Mark Warnes. For the 3rds, wicket keeper-batsman Angus Muir was the star man with two fine stumpings followed by an innings of 52 not out that was full of exciting strokes as the 3rds consolidated their place at the top of the league with a 6-wicket victory.

Photo: Alan Day, another half century and selection for Cheshire.