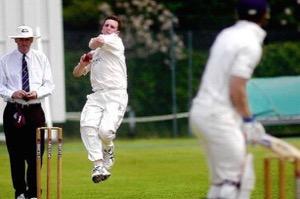 Alderley Edge 1st XI showed themselves to be genuine contenders for the Cheshire County league Premiership title on Saturday with an outstanding victory over current champions Hyde at their attractive Werneth Low ground. Winning the toss and choosing to bat first, Hyde were all out for 172, none of their highly talented batting line-up getting past the 30s due to a disciplined bowling performance and a brilliant exhibition in the field from Alderley. Sean Sturrock and Richard Wilkinson each took 3 wickets.

In reply, Alderley recovered well from the early loss of the prolific Calum Rowe with Wilkinson and Alan Day taking the score to 94 before both were dismissed in similar fashion. Skipper Adam Worrall followed, and at 108-4 the match looked in the balance but an undefeated 65-run partnership between Mark Currie and Charlie Reid saw Alderley home to gain another 25 point haul.

Wilkinson was in top form with the bat in the Cheshire Cup match at Port Sunlight on Sunday but unfortunately his 95 and a gallant 31 not out from Ben Lambert left Alderley tantalisingly one run short of their opponents' score.

The 2nd XI were soundly beaten by Hyde on Saturday but the 3rd XI notched up a 'double whammy' of victories against Prestbury and Alvanley, with Mike McGrath and Angus Muir among the runs and young bowlers Henry Scanlon, Nathan Pugh and Harry Elms all enjoying significant wicket hauls.