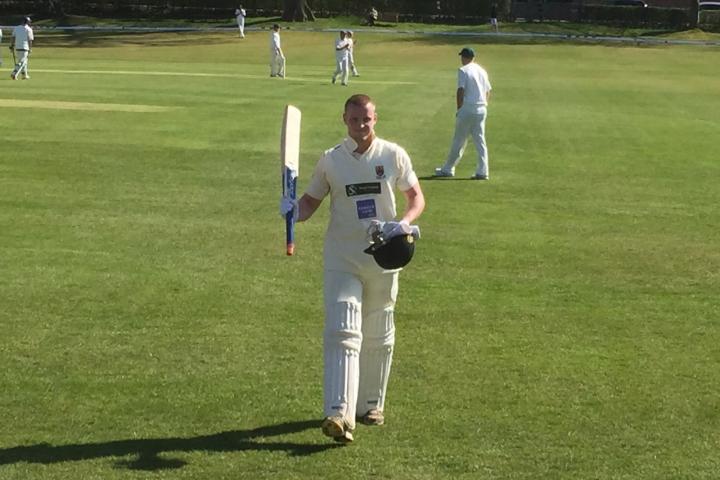 Alderley Edge's Cheshire batsman Calum Rowe continued his outstanding start to the season with a second century in three league innings, his 126 being the mainstay of Alderley's 262-4 from 55 overs.

Richard Wilkinson added 87 as the pair put on 193 for the 2nd wicket. Although no Macclesfield batsman got past the 30s and wickets fell fairly regularly to Sean Sturrock, Tom Foreman and Wilkinson, Macclesfield hung on gamely for a draw, ending on 172-9.

Excellent wins for the 2nd and 3rd XIs showed the club to be in a healthy situation. The 2nd XI chased down a big Macclesfield total of 252 (Tom Wildig 5-67), getting home with one over to spare in an exciting run chase, Ed Fluck contributing 69 and Marc Chan and Oliver Wildig both 48.

The 3rd XI match against Elworth was dominated by a century for 13-year-old Harry Elms, his 115 not out featuring in a partnership of over 200 with the legendary Jon Bean, who was finally dismissed on 99! Will Chalk's four wickets played a key role in Alderley's 74 run victory.

In mid-week Alderley met with success at both 1st and 2nd team level in the T20 Cup competitions.

The 2nd XI won a close game at Stockport, where fine bowling by Dan Fesmer and Mark Warnes, who shared 7 wickets, saw the home team bowled out for 101, which Alderley passed with 3 wickets in hand thanks largely to a typically belligerent 41 not out from Oliver Wildig.

The 1st XI enjoyed much more comfortable progress against Warrington, who were bowled out for just 88 thanks to a fine combined bowling effort and a brilliant display in the field which included 4 run outs. In reply, Calum Rowe (52 not out) and Mark Currie (35 not out) needed only 9 overs to see Alderley home to a 10-wicket victory.