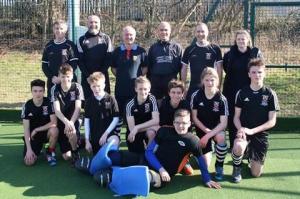 The first team finished their campaign with a home game against Bowdon, already comfortably sitting in mid-table. Alderley Edge were looking good from the start and playing a decent passing game and they opened the scoring when Simon Parr and Ben Gregory linked up and Gregory's cross shot was deflected in by his brother Sam. Ben was nearly on the score sheet soon after when his half volley looked to be heading for the top corner until the 'keeper got a faint touch to divert it on the crossbar. Bowdon then nearly equalised as Riley did well to react to keep out a cross shot as they mounted pressure in and around the Alderley D.

Both teams played decent hockey with ball being passed at pace and solid defending keeping the chances limited, McCormick next tested the Bowdon 'keeper with a flick from a penalty corner and Wildig failed to capitalise from Coxon's endeavours.

As half time approached, Leddy was caught out just inside the D and from the resulting corner the Bowdon routine went awry but fell kindly and the ball was slapped in for the equaliser.

There was just time for Alderley to mount one last attack and they won a penalty corner of their own, the routine worked perfectly as Ben Gregory sneaked in to deflect the ball over the 'keeper to give Alderley the half time lead.

The second half was played with a little more intensity and it was Alderley that stretched their lead when another well worked corner routine saw Mattingly pick out Frankie Bryant who deflected in at the near post.

Alderley then seemed to start their end of season festivities early as they still played some nice link up play using full backs Cresey and Kay as outlets, but it was in the middle where play was breaking down.

As Bowdon grew more into the game and started to be more of a goal threat. They pulled one back when despite clearly kicking the ball into the D the Bowdon forward was allowed to play on and his shot found its way into the goal.

Alderley were then their own masters of their down fall as they started to turn over possession deep in their own half and when the marking went wrong it presented the Bowdon forward a clear shot at goal and at the third time of asking he managed to squeeze the ball in for the equaliser.

Then late in the game Bowdon won a penalty corner and despite Riley's initial save the ball was kept alive by Bowdon and the player had enough time to pick his spot shooting in reverse stick.

The second team with another change of personnel and giving some youngsters a chance to stake a claim for a place next season, travelled to Winnington Park. In a game of errors Alderley conceded a soft goal to allow Winnington the lead, but fought back well as Andrew Wood scored twice in between further goals from the hosts. Alderley could have got something out of the game as Matt Hardy went close with just the keeper to beat and Chris Hardy just missed the target with a late penalty corner after having a penalty stroke saved. Final score 3-2.

The third team had a 2-2 draw with second placed Neston 2s, which they hope will be enough to keep them up, as teams below them still have a game to play.

The 4s, who still have two games to play, may have just missed out on promotion despite beating Llandudno 1s 3-1. A third place finish looks likely, which is where the 5s are sitting, knowing that due to head to head record they were not going to make the top two, they lost 3-2 against Neston, fighting back from 3-0 down.

The 6s still have two games to play and sit mid table after losing to promoted side Brooklands 5s.

Alderley Edge 7s have secured promotion following a fine victory over Timperley. The mainly youthful squad with experienced support put in another fine performance and they were comfortable 5-0 winners, with the goals coming from a Sam Buckingham hat-trick, Charlie Toms and a Greg Johnson penalty corner. They are six points clear of Triton with a game to go. Keele Uni 1s have won the division, a new club to the league they have won all of their games. It is the first season in Men's hockey for all the youngsters and thoroughly deserve their success.