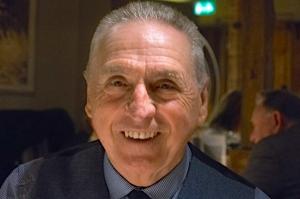 As I'm the new kid on the block I thought it appropriate to set out the Rules of Engagement. It's been made abundantly clear the views expressed in Barlow's Beef are mine alone. At times my editor's views may differ but will allow me to voice an opinion.

She believes in democracy and should you disagree with me feel free to do so in the comments section. Some of my best political friendships were forged in heated debate (Liberal Mayor Councillor Clampett belted me with her handbag for comparing her to Deirdre Barlow's mother. Labour Councillor Ken Thompson once threatened to throw me in the canal and former Conservative Brendan Murphy called me a 'washed up holiday camp comedian' when I criticised his stance on Dane Gate). Happy days.

Councillors have families too and I have no desire to cause them distress. Nothing I write is personal but it's the job of councillors to make decisions and my job to comment. They chose their role and I chose mine. I don't take offence at their often-bizarre decisions and the way they impinge on the lives of others but I do express an opinion.

Now we have that out of the way let's talk about truth and accuracy. It should be simple but it isn't. In my long experience political praise is always just and criticism unjust.

If I write 'The Conservatives have let the cat out of the bag...'

Tories will claim they were only trying to relieve the cat's suffering. While the Labour Party insist the Tories intended to throw the cat in the canal and the Lib Dems wouldn't recognise a cat if they saw one.

A can of worms is a welcome delicacy to one party and anathema to another. It all depends which side of the can you're on. So, councillors, please don't complain about 'inaccuracy' simply because you don't like my story. You can be sure your opposition will think it spot-on... until I write something they don't like.

Basically politicians consider all compliments directed at them and their party to be accurate and all criticism a lie. They repeat it endlessly among themselves until they believe it.

Do I get things wrong? Yes, of course I do. I thought the Alderley By-Pass would kill local trade and it did nothing of the sort. Councillor Keegan clobbered me good and proper and he was right.

Remember, I'm expressing an opinion not swearing under oath.

The process is called democracy. Residents expect their council to do a good job representing them and they expect me to do mine. Let's get it on.

Seconds out... and no whinging.

Gillian Martin
Could Vic Barlow be persuaded to stand for the Parish Council?

Adrian Scott
Bring it on Vic. One of the best reads in the Express group and great to welcome him onto Alderley Edge.com (He's a brilliant dog trainer too !!)

Suzanne Gorringe
Delighted to see you are now on alderleyedge.com. Your column in the Express is essential reading.

Judy O'Brien
We always enjoy reading Vic's column in the Express. Great news that he is going to be writing for ae.com too, a super addition...and yes, I too can vouch for his terrifically helpful dog training classes! :-)

Mike O'Rourke
I like the cut (and thrust) of your jib sir.

Vic Barlow
Thank you so much.
I'll be thrusting my jib very shortly.
Looking forward to hearing from everyone.
Keep those stories coming in.

John Clegg
Not bad for a washed up holiday camp comedian, eh? Councillor Murphy could obviously pick out a person's character - er, except when it came to his colleagues, maybe.