Hockey: Mixed results for the men of Alderley Edge 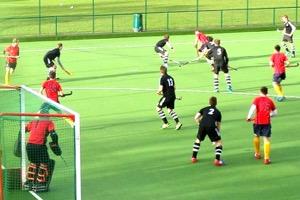 Three of Alderley Edge Men's hockey teams maintained their promotion challenges with victories this week but it wasn't such good news for the other sides.

The first team went to league leaders Brooklands with key players unavailable and put in a spirited performance. Alderley could have taken the lead when Sam Gregory broke clear but the 'keeper blocked. James Riley was called into action doing well in a one on one situation and keeping the Brooklands penalty corner team at bay.
Alderley were competitive with Parr and Bryant industrious and looking to push the team forward and half chances for Wildig and Coxon were created.

Brooklands took the lead when a quick free hit caught Alderley on the back foot and the striker controlled and fired in a reverse stick shot, Alderley thought an offence had occurred, but the Umpire, probably correctly disagreed.

The rest of the half saw Brooklands have the majority of possession and chances with Cook and McCormick defending solidly, but Alderley were always a threat on the counter attack keeping Brooklands on their toes.

As half time approached Alderley conceded a second as a misplaced pass allowed Brooklands to stream forwards, resulting in a three on one, they moved the ball well and despite Riley making the initial save the rebound fell kindly for the Brooklands player to finish into an open goal.

The second half was more competitive as Leddy and Sanders busied themselves in the middle of the park, this disrupted the flow of the game, but Alderley were looking short of ideas as the sixteen man squad of Brooklands rotated and kept the intensity high.

As the game looked like petering out with Alderley's short corner defence holding strong and little other opportunities being created Gregory intercepted a pass and he crossed for Wildig whose initial effort was saved by the keeper before he finished second time. As Alderley celebrated and Brooklands headed for the half way line the Umpire disallowed the goal, nobody sure of the offence.

To compound the issue, Brooklands then made it 3-0 when a free player in the D finished well on the reverse stick side.

Simon Parr then broke away and his pass just evaded the on rushing Wildig and there was just time for Ben Gregory to pick up a yellow card and a suspension before the final whistle sounded.

The 2s with a threadbare squad took on Urmston in what is always a combative affair and this proved to be no exception, however Alderley's lack of numbers and then injuries to Sims and Wildig meant that Alderley were down to nine men in the second half and they went down 7-1.

The third team are still looking over their shoulder as they sit just above the relegation zone after slipping to a 4-2 away defeat at Brooklands. One point separates the bottom four sides.

However, the fourth team faced a tricky fixture away at Bangor City and came home with a 2-1 victory, with two games in hand they will be hoping for a slip up from one of the top two.

The 5s are very much in with a shout, lying just one point behind second place following their 8-3 away win at South Cheshire, the pick of the goals was Ed Kennon's finish into the roof of the net, Tom Smith's drag flick and Ali Smith's reverse stick finish other goals came from top scorer Fin Allenby (2), Rob Thompson (2) and a Joe Bryant penalty stroke.

The sixth team eased their worries with a solid 3-1 win over Sale 3rd team. They also have two games in hand over the sides around them.

The youngsters in the 7th XI continued their winning streak beating Stockport/Bramhall 3s 8-2. The victory sees them 3 points behind Keele Uni 1s, who they play on Saturday and six point above 3rd placed Triton. Promotion is very much in their hands and an outside chance of the title.