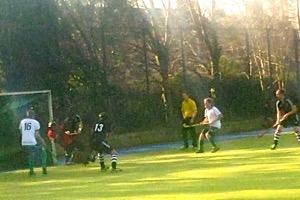 Alderley started well as both sides showed their attacking intent, Sam Gregory used the width well and was able to make surging breaks. Throughout Alderley were not able to make the most of their opportunities, with the Preston 'keeper rarely made to make a save.

The pace of the game was decent throughout and the Alderley backline had to work hard to limit the Preston forwards. Penalty corners were always going to be important and Riley saved well at one end where the Alderley routines did not quite click. Simon Parr and Ben Gregory had possession in the attacking D but could not find a way through.

Preston took the lead when they broke down the base line and despite the first effort being saved Preston played an advantage and finished well from 8 yards out.

The effort level of both sides was maintained in the second half, Alderley's quality faltered and the well organised Preston side kept plugging away. The score was 2-0, when following a decent save the rebound was volleyed in.

McCormick had a couple of penalty corner efforts saved as Alderley tried to get back into the game, but when they were caught napping from a long corner again Preston got in on the base line. This time the pull back was spot on and the flicked finish found the net.

Preston grabbed a late fourth from a penalty corner as Alderley down to 10 men began to tire.

Alderley have a tough run of games, but are sitting comfortably in mid table, but will want to kick on for the final few matches to better previous season's placing.

The seconds had an emphatic 7-1 victory at home against Bebington, with all the goals coming from open play thanks to a Nick Sims with four, Harry Whitehead (2) and Chris Ashton. This moves them to 3rd place in the league, which would be a great achievement if they can maintain it.

The 3rds had another tough loss going down 3-2 at bottom side Bebington, meaning the bottom end of the table is very tight with five points covering five teams for the second relegation spot.

Alderley Edge's 4th string maintained their promotion push with a 5-1 victory over Triton first team. They have two games in hand but will need to win them both to give themselves a real chance.

The fifth team lost agonisingly 4-3 in their promotion clash with Mossley Hill, conceding in the last 15 seconds, but it was a spirited performance from a side missing several regulars.

The sixth team lost 7-1 to league leaders Sandbach 1st team, they have two games in hand and a couple of points advantage to the sides below them.

The 7th team did not have a league game this week.