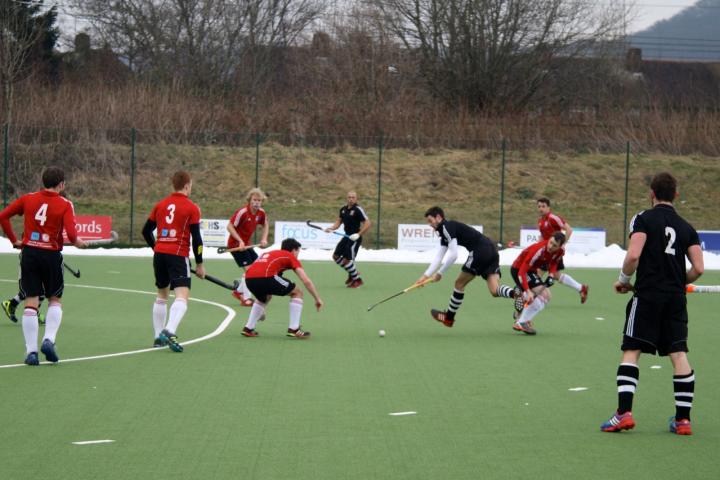 Alderley Edge hosted high flying Whitley Bay this weekend looking to avenge defeat in the reverse fixture, where they were outplayed and deservedly beaten.

From the start Alderley Edge were bright and set up to make use of the pace out wide and this nearly paid dividend as Sam Gregory broke away and he just failed to lift the ball over the advancing goalkeeper. Ben Gregory was pulled back by the Umpire when he was fouled but and advantage would have given him a clean shot at goal.

Adam Wildig saw his shot go wide of the post and Gregory did well to beat his marker and get a shot in but missed the target.

Alderley Edge were made to rue these missed opportunities as on the counter attack the Whitley Bay forward broke into the D and cleverly finished. Alderley had chances to equalise as Ciaran Sanders made room for himself before seeing his shot cannon back off the post and Frankie Bryant couldn't finish the rebound.

Whitley Bay were more in the game and James Riley saved well from a penalty corner as chances began to even out. The Whitley bay 'keeper thwarted a combination of Coxon and Wildig. Before Wildig did score getting a decisive touch on Gregory's shot.

On the stroke of half-time Whitley Bay were given a penalty corner and with all the outfield players up they produced a tidy routine that saw the ball deflected into the net.

The exertions of the first half seemed to knock the stuffing out of Alderley Edge and despite the bright performance of Todd Leddy and good defensive work from Kay and Cresey, Alderley were never really the dominant team. Riley was by far the busier 'keeper throughout the half and was called into play on several occasions to sweep up behind the defence.

Whitley Bay scored a third when they were stronger in the tackle on the edge of the Alderley 'D' and as the bobbling ball broke into the circle a first time slapped finish found the bottom corner.

Alderley did have half chances and won a string on penalty corners but did not find the target with any of the routines.

Whitley Bay had one final chance as they won a penalty corner as time expired but a combination of Riley and Whitehead meant the final score finished 3-1.

It was much better news for the second team, who put in a good performance away in Liverpool against Northern. Dominating throughout they were 4-0 winners with goals from Oli Wildig and converted penalty corners by Andrew Wood, Joe Gregory and Nick Sims. They now sit fourth with a game in hand on third.

The 3s are still looking over their shoulder as they lost 3-2 to Triton 1s, conceding a last minute goal and are one point above the relegation zone with five teams in the mix.

The 4th team had a good win putting five past Deeside Ramblers and conceding just one. With games in hand they can get to within a point of the promotion places.

The 5s moved into second spot as they defeated Chester 3-2, they take on third placed Mossley Hill next week.

Alderley's sixth string lost out to Timperley 5s, their fifth consecutive defeat , and are in the bottom half of the league, but with games in hand.

A season to remember for the talented youngsters of the 7th team continues as they have now scored 34 unopposed goals in the last three matches as they rattled up a 9-0 victory away at Triton, goalkeeper Martin Webb did not touch the ball as goals from Sean Neary (3), Sam Buckingham (2), William Hedley (2), Morgan Jennings and Greg Johnson saw them coast to victory.

Match report by By Ben Whitehead.