A tale of our times 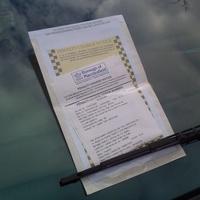 Listeners to BBC Radio 2 were no doubt astonished to hear Stuart Hall's tirade against the "Gestapo" traffic wardens of Alderley Edge who ticketed him and fellow mourners whilst they were attending the funeral of celebrated local journalist Duncan Measor, otherwise known as the Manchester Evening News's long-time diary editor, "Mr Manchester".

Commenting that Duncan would be turning in his grave to see how callously they were treated for parking on single yellow lines in Ryley's Lane when on-street spaces and car parks rapidly filled up, he went on to remark how "the Gestapo army" which had descended on the village in recent times are driving car borne shoppers away, destroying the ambience of an idyllic rural haven and ruining trade for local shopkeepers.

Almost as vehement as Stuart's outburst were the anti-car rantings of local councillor Marc Asquith, who joined in the discussion on the Jeremy Vine Show to defend traffic wardens, saying that they were necessary to control inconsiderate motorists who overstayed their permitted parking time or flagrantly ignored no waiting signs and claimed that they actually made things better for traders by more regularly freeing up car spaces for other shoppers.

However, he conceded that Cheshire East Council has since decided to cancel the parking tickets because of the exceptional circumstances, pointing out that no-one had thought to inform them that such an important funeral was taking place that day.

So what are the rights and wrongs of this particular tale of the modern motoring age ?

I too was at Duncan's funeral and was amazed to see so many cars lining the streets approaching the church. Indeed, the Rev Carole Walker, who conducted the service, remarked that she had never seen St.Philip's so full. No-one in their right mind could have imagined that they were there for any other purpose than a funeral and that deep offence would not be caused if mourners were given a parking ticket or were made late for the service because they were hunting for a spot to park.

So why did the wardens persist in doleing out their £70 penalty notices - do they not have the discretion to use their own judgement in such circumstances or are they mere Jobsworths slavishly following regulations ? Or, as some would say, do they simply delight in persecuting drivers, especially if they happen to be driving a BMW, a Mercedes or a Porsche, which were much in evidence ? Those of us who have seen our local beauties lurking in a doorway at the side of the library observing the Fezzes and Lambos parked outside Gusto could be forgiven for thinking so.

Is it more about raising funds for the council ? According to the local press, in the final year before reorganisation, Macclesfield Borough Council collected a little short of £1m in parking fines. How much is our new super authority budgeting to rake in from motorists this year ? To what extent are they just another form of council tax ? I think we should be told.

And what about the effects of an aggressive anti-car campaign on the local economy ? Stuart Hall told the nation his local butcher is adamant that trade has suffered badly since the "Gestapo" hit town.

No doubt that publicity in itself will only serve to make things worse by encouraging shoppers to go to neighbouring towns like Northwich with its large and free central car park. It's high time councillors stopped regarding the car as a menace to be driven off the streets at all costs and instead found positive solutions to the problems they pose which also recognise the contribution they make to our lifestyles. (I'll leave the green arguments against to other correspondents).

Fortunately, if the worse fears about the design of the Alderley Edge by-pass are realised, perhaps we shall soon have ample extra parking space close to the village centre.

Marc Asquith
Sadly, Roger was obviously not listening. Matthew Bannister was standing in for Vine and I joined just after a traffic enforcement officer, employed by a private company with a contract to a local authority had made his comments as to the discretion of officers - essentially he said that he had no discretion and it was for his superiors to exercise discretion upon appeal. Bannister asked if he was on a bonus for the number of tickets issued and he denied it.

My comments were as follows:-

1. That particular yellow line is 140 metres long. Mourners were therefore less than 100 yards from the "Lakes" residential area where there are no restrictions and no matter how full the church - there was plenty of space to park in the Lakes. ( Not to mention Eaton Drive leading onto Wilton Crescent.)
2. Cheshire East employs its own Wardens. They are not on a bonus scheme for tickets issued.
3. The yellow line on Ryleys Lane is there for 3 good reasons, AECPS, Ryleys School and AESG. - just take a look at the parking in that area when the kids are at school and it is dropping off or picking up time !
4. The offense occurred when the kids were on holiday and given that is was a funeral, maybe the Council were right to apologise and rescind the ticket.
5. Many of the problems that are now happening arise because parking enforcement was transferred from the police to the Borough Council a year or so ago. That has lead to problems where unrealistic parking restrictions are now being enforced, whereas previously the fact that they were unrealistic didn't matter because no one enforced them anyway.
6. Parking restrictions do not make cars disappear - they just move them elsewhere - often such that they just irritate a new group of people.

And I said all that in about 1 minute having been told by the researchers that the show was running out of time. I listened to the BBC i-player after the show just to be sure I had made the points that I wanted to, even if it had been in a hurry and was pleased that I had managed to get it all in.

As for being Anti Car - Roger really got the wrong end of the stick. I was the only Councillor who voted against the transfer of parking enforcement repeatedly because I could see the problems it was going to bring to the motorists in the village and can I remind Roger that it was I who picked up the baton from Margaret Melrose and ran with it for eight years in order to see the Bypass that is now being built get underway. Hardly anti car.

Finally - yes I think all those who got tickets were idiots. The Parking Warden in the Village is very well known - clearly Roger knows of his existence and his approach from what he has written above - and still people thought that parking on a yellow line would be ok ? Who in their right mind - knowing what the wardens are like - would even chance it for the sake of a few hundred yards walk. ( and don't forget, those not good on their pins get blue badges which allow parking on the yellow line ) Frankly they were just too filled with their own importance or were just being idle.